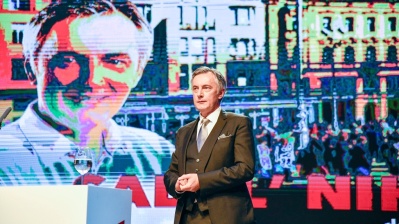 As the polls narrow dramatically in the final days before the first round of Croatia’s presidential election, singer Miroslav Skoro has a real chance of beating the candidates of the two main parties and winning the election.

The latest poll released by RTL/Promocije Plus shows just over one percentage point between the frontrunners, President Kolinda Grabar-Kitarovic and Zoran Milanovic of the opposition Social Democratic Party (SDP), who have led the polls since the beginning. Grabar-Kitarovic is the preferred choice of 26.8% of respondents and Milanovic was picked by 25.4%, according to the poll compiled for broadcaster RTL in conjunction with Promocije Plus agency.

However, Skoro’s rating has leapt to 21%, up from 16.7% in a November poll, indicating he has a chance of making it to the second round runoff against one of the two main parties’ candidates.

And while Skoro is the third placed candidate for the first round of voting on December 22, the poll shows he could defeat either Grabar-Kitarovic or Milanovic should he make it through to the second round which will take place on January 5.

With 7.9% of voters still undecided, any two of the three leading candidates have a chance of making it through to the second round.

Outsiders on the inside

In running for Croatia’s top office, Skoro joins other political outsiders from showbiz, who have benefitted from voters’ disillusionment with the political elite. Notable examples are Ukrainian President Volodymyr Zelenskiy, who played a fictional president in a TV show before being elected to the presidency this year, and still enjoys sky-high poll ratings. Closer to home is Marjan Sarec, prime minister of Slovenia, who caricatured famous politicians before becoming a politician himself.

Skoro is best known for his pop-folk music; his Ne dirajte mi ravnicu (Don't touch my field) is one of the most famous songs in Croatian.

His campaign for the presidency is backed by centre-right and right-wing parties including the Bridge of Independent Lists (MOST), the Croatian Conservative Party (HKS) and conservative Hrast (Growth).

This is not his first entry into politics. He joined the Croatian Democratic Union (HDZ) — which is currently backing Grabar-Kitarovic for re-election — back in 2007, and was elected to parliament, but resigned the following year. He said in an interview with Hina that he returned his mandate when he saw that “the system did not allow changes … I did not want to be a parasite living off taxpayers’ money.”

Like many populist leaders, Skoro describes himself as a self-made man of the people, in contrast to the current president and the rest of the political elite who he says are “completely separated from the people, their desires and interests”. In a Facebook post he asks voters to support “an independent president who brings changes!”

One of the policies espoused by Skoro on announcing his campaign is to strengthen the powers of the presidency. Skoro has stressed that rather than turning Croatia into a semi-presidential republic, his aim is to balance the power of the prime minister. He has slammed Grabar-Kitarovic for not seeking to expand the powers of the office she currently holds.

The past and the present

With the Croatian war of independence still looming large in the public consciousness, Skoro has courted controversy — and at the same time appealed to many Croatian voters — by speaking out against the decision to outlaw the salute "For the homeland ready” that was used by the Nazi-allied Ustasha forces and later by the Croatian Defence Forces (HOS) in the Yugoslavian wars of the 1990s.

In an interview with state news agency Hina, Skoro pointed to the use of the salute by the HOS, and said be felt salute had been criminalised so as to “tarnish the HOS and hence the entire Croatian army and Homeland War. Something like that must not be allowed.”

On social media, Skoro’s supporters talk repeatedly of his love for his homeland and the Croatian people — as reflected in his music.

Among his songs are Sude mi (Putting me on trial), dedicated to former Croatian general Ante Gotovina, who served in the 1990s and was convicted by the International Criminal Tribunal for the former Yugoslavia (ICTY) on charges of war crimes and crimes against humanity, though his convictions were later overturned.

Positioning for the 2020 general election

While the presidency is largely a ceremonial position, the outcome of the election will have a significant impact on domestic politics in the run-up to the next general election, which must take place before the end of 2020.

Among the main candidates, Croatia’s first female president Grabar-Kitarovic has struggled to make a convincing case for reelection based on her record in office despite pointing to her role in representing Croatia abroad in particular in championing the Three Seas Initiative. Should she lose the election, it would be a setback for the ruling HDZ that is backing her candidacy, and could destabilise Prime Minister Andrej Plenkovic’s government.

Milanovic, meanwhile, is looking to make a political comeback after his party lost the 2015 and 2016 general elections to the HDZ, after which he stepped down from the SDP’s leadership and announced his retirement.

A win for Skoro would be a blow to both of Croatia’s two main political parties, and would throw open the contest for the 2020 general election.