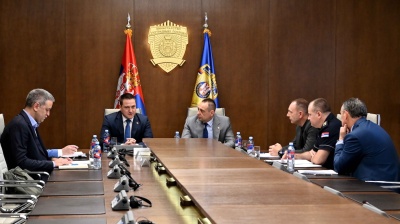 Serbian ministers discuss the bomb threats on hundreds of buildings in Belgrade. / mup.gov.rs
By bne IntelliNews May 18, 2022

Serbian officials including Prime Minister Ana Brnabic have linked hundreds of bomb threats to the country’s refusal to join international sanctions on Russia.

Since Russia’s invasion of Ukraine, Serbia, as an EU candidate country, has been under pressure to join the sanctions. However, while condemning the invasion it has so far refused to sanction Russia, citing Moscow’s longstanding support.

On May 16, Belgrade was paralysed by several hundred threats that bombs had been planted in public buildings across the city.

More than 100 of the threats claimed that bombs had been planted at primary schools in Belgrade. Other targets were bridges, shopping malls, a zoo, restaurants and a train station. None of the threats turned out to be real.

Minister of the Interior Aleksandar Vulin said on May 16 that e-mails to institutions and the media had been sent from several European countries. The newspaper Danas reported receiving a threatening message from the address sb1465@yandex.ru.

“It is a form of pressure for not imposing sanctions on the Russian Federation, coming from abroad. It is not naive at all, it is not accidental, it is something that has been well prepared and carefully planned,” said Prime Minister Ana Brnabic during her appearance on the pro-government Pink television.

Vulin called the bomb threats “a special war [that] is being waged against Serbia”, a ministry statement said.

"A special war is being waged against Serbia, and neither school institutions nor children were spared in that war. Our state is serious about solving the problem of false reports about bombs. The Ministry of the Interior takes care of the safety of all citizens, especially children, and we will do everything to ensure that classes go smoothly,” said Vulin at a meeting with Minister of Education, Science and Technological Development Branko Ružić to discuss the issue on May 17.

In an earlier statement on May 16, Vulin said: “Threats from various European countries are threatening the addresses of institutions, news outlets and companies. Attacks on our country have not been initiated or carried out by any individual, they are mass, organised and very expensive hacker attacks, led from various centres for hybrid warfare.”

He added: “The value of the equipment alone needed for a strike of such a volume and strength as took place today, exceeds one hundred thousand euros, but the damage inflicted in lost working hours and the suspension of the economy is in the millions.”

Population decline to take Emerging Europe back to the early 20th century
BALKAN BLOG: Southeast Europe’s ties to Russia prove hard to sever
Serbia to crack down on environmental crime