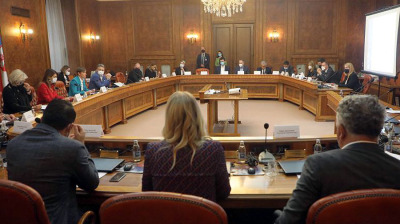 Council for Development of Digital Economy / The Government of Serbia
By bne IntelliNews September 20, 2021

The Serbian government plans to carry out 35 projects worth €177.6mn to increase the availability of financing for innovative companies, development of digital infrastructure and investments in research and development, a government statement said.

Brnabic pointed out that, thanks to the work so far and the results of the Council for IT and Innovative Entrepreneurship, Serbia is today recognised as a country that significantly invests in the development of e-government, innovation and digitalisation.

She added that especially significant results have been achieved when it comes to education and innovation infrastructure, construction of science and technology parks and startup centres.

“Now we have five new priorities, namely artificial intelligence, biotechnology and biomedicine, smart cities, the future of mobility and the use of geospatial data,” said the prime minister.

Minister of Trade, Tourism and Telecommunications Tatjana Matic pointed out that digitalisation has contributed to doubling the number of electronic transactions, which increased from €17.8bn in 2019 to 32.8bn in 2020, and last year ended with 2,013 online stores.

She added that the further development of both e-commerce and the digital economy can be seen in the additional development of telecommunication infrastructure and digital skills. According to Matic, approximately 940 schools received new computers and equipment last year and 950 this year, and 90,000 households in rural areas were connected to telecommunications infrastructure.