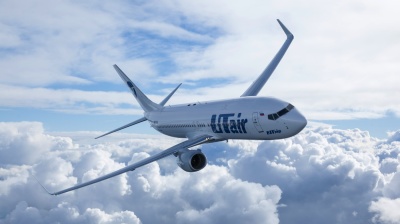 Russian state-owned banks VTB and Sberbank could use the heavily indebted airline Utair as the basis for creating a new regional airline, Interfax reported on January 10.

The two state-owned banks were tasked by the government to set up another domestic airline in October 2018, to improve transport links within the country that stretches across eight time zones.

Developing internal transport links is one of the government’s infrastructural goals, and the state-owned national airline has also begun investing in improving its internal services, where ticket prices are often higher than flying equivalent distances on international routes.

“A variant is being considered to take Utair for this project by converting the debt to Sberbank into shares,” Vedomosti reported, citing sources “who know about this from state bank employees” and a person close to Utair management.

If the new airline goes ahead it will cut into the domestic airline business and hurt the privately owned airlines that operate inside Russia. A Sberbank-VTB owned carrier could become a major competitor to Aeroflot and S7 Group, the two largest air carriers with 50mn and 14.3mn passengers transported in 2017, respectively.

UTair was on the verge of bankruptcy in 2015 thanks to the “silent crisis” at that time that saw a steep devaluation of the ruble and consumer spending plunge. While the company returned to profit by the end of that year, it remains heavily indebted to the state-owned banks that effectively bailed the company out.

Observers worry about the growing presence of the state in the aviation market, but as in the banking sector, that also went through a crisis in 2017, state-owned entities were used to rescue struggling private sector companies.

The project to create a powerful new domestic carrier controlled by Sberbank and VTB is classic Kremlin hybrid thinking. The state likes to control the most important companies in strategic sectors, however, to ensure there is some competition to promote efficiencies it usually sets up two state-owned entities that are in direct competition with each other.

These state-owned pairs can be seen in several important sectors such as Sberbank-VTB in banking, Gazprom Neft-Rosneft in oil, Gazprom-Rosneft in gas (since Rosneft was given permission to sell gas domestically several years ago). Other non-political sectors like retail and agriculture are dominated by privately owned companies and left to work on market principles. In aviation the new regional airline is being set up to compete with Aeroflot.

The Kremlin pushed Aeroflot, Russia's largest airline, to take over beleaguered Transaero, Russia's second largest, for the symbolic price of RUB1 in September 2015, consolidating its dominance of the Russian market but landing it with heavy debts. State-controlled Aeroflot had a 37% share of the Russian air travel market in 2013, according to its website but together with privately-owned Transaero's 14.8%, that increased to over 50% market share.

Aeroflot has also received state banking support to grow its domestic business with another RUB300mn ($5mn) of state subsidies for developing routes to the Far East districts last year. Aeroflot carried almost 56mn passengers in 2018, up 10% from the 50.1mn passengers it carried in 2017.

In September it was reported that Aeroflot plans to launch four regional aviation hubs in addition to the one in Moscow's Sheremetyevo airport, potentially developing more routes from St Petersburg, Sochi, Krasnoyarsk, and one of the cities of the Urals region. Aeroflot Group has already boosted its presence in the Russian regions by launching domestic airline Rossiya and low cost Pobeda. The ambitions to boost its regional presence are in line with plans to order 100 medium-distance Russian Sukhoi Super Jets, well suited for domestic regional flights.

However, the overreaching goal of all this activity is to improve connectivity within Russia and money has also been given to the privately owned carriers. Overall the government spent RUB3.8bn on supporting regional flights to Far East, Kaliningrad, and Crimea for seven carriers (Aeroflot, Alrosa, Nord Star, S7, Urals airlines, UTair, and Yakutia) last year.

Similar large scale investment programmes have been launched to improve roads and rail as part of Russian President Vladimir Putin’s May Decrees that focus on improving the country’s infrastructure.

The option to take over Utair comes from the heavy debts it owes, primarily to Sberbank. In addition, the Ministry of Transport at a recent meeting on Utair’s debts said that there is an instruction from the president not to bankrupt the airline, Vedomosti reported. A final decision has not yet been made and the banks are also considering partnering with other candidate airlines. Setting up the regional operator from scratch is highly unattractive given the heavy investment needed in planes and the long time getting regulatory approval for a new carrier would take.

“Banks are considering various options, the model is still being worked out, so it’s premature to comment on any details,” a spokesman for VTB told Vedomosti. Sberbank and Utair declined to comment.

Utair owes 11 banks a total of RUB38.6bn on two syndicated loans made in 2015, of which a third is directly owed to Sberbank. The other two largest participants in the syndicate are Trust bank (35%) and Rossiya (20%). The state has also made a direct loan to the company of another RUB17.4bn, which is under the management of Sberbank, bringing the share of the debt under Sberbank’s control to just over half of the outstanding debt.

Repayment of the loans was scheduled to begin in 2020, before which Utair only need to pay interest, but the company went into technical default on December 20, 2018 after it failed to transfer about RUB1bn to creditors on one of the syndicated loans. The company kept the money back saying it needed it as working capital.