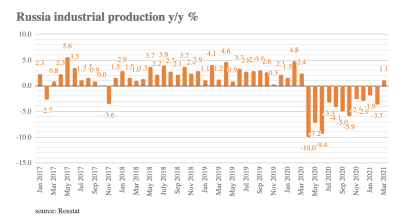 After contracting for 11 months, Russia's industrial production was back in the black, expanding by 1.1% in March as the economic recovery got underway
By bne IntelliNews April 16, 2021

As reported by bne IntelliNews, in February industrial production fell heavily by 3.7% y/y due to the leap year affect, down from a 1.9% contraction seen in January.

But in March, industrial output grew in two key segments: manufacturing was up 4.2% y/y and output in utilities rose 11% y/y. Extraction remained in the negative zone (-5.6% y/y) due to significant falls in the production of crude oil (-9.5% y/y), the same as previously capped by OPEC+ output cuts.

"In March, production of the majority of industrial goods was up in y/y terms, with the largest gains seen in the output of natural gas, textiles and clothing, electronics, wood-processing, automotive industry and defence-related items," BCS Global Markets commented on April 16.

A change in the base factor will lead to considerable improvements in the y/y dynamic in industry in April, as well as in the economy at large, chief economist of BCS GM Vladimir Tikhomirov argues.

BCS GM expects positive trends to continue in the following months as well, although anticipating a gradual moderation in growth rates during 2H21. The analysts reiterate the forecast for industrial production growth in 2021 at 5.9% y/y (in 1Q21, industry was still in decline at -1.3% y/y).

Analysts at Sberbank CIB also expect to see industrial production grow in y/y terms in the upcoming months due to the low base effect caused by the pandemic. Sberbank CIB's forecast is for industrial growth for the year to come in at 4%.

Ukraine’s GDP fell 1.1% in the first quarter of this year in seasonally adjusted terms compared to the same period a year ago, the state statistics committee said on May 14.

Poland is about to reopen nearly in full this month in line with the vaccinations being rolled out to more and more people.

Biggest contributors to the annual rise in inflation was a 10.7% y/y hike in transport prices.

Ukraine’s GDP falls 2% in 1Q21
7 hours ago
Poland’s GDP eases fall to 1.7% y/y in Q1 in harbinger of recovery
8 hours ago
Consumer prices rise 2.1% y/y in Croatia in April
20 hours ago
Romania’s inflation up in April on higher fuel and electricity prices
3 days ago
Romania’s net wage hits record €726 in March
3 days ago