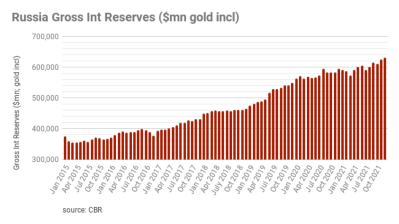 The biggest contribution to reserves was the one-off payment of $17.5bn in late August by the International Monetary Fund (IMF) in the form of Special Drawing Rights (SDR), the fund’s currency, that was part of a $650bn payout to help countries recover from the effects of the coronavirus (COVID-19) more quickly. That payment boosted Russia’s reserves to a new all-time high of $615.6bn as of September 1.

However, reserves added almost the same amount again thanks to rising commodity prices that have seen the current account also surge to an all-time high.

Russia’s trade surplus also soared to reach $162.8bn in the first eleven months, up from $142bn in ten months, supported by high commodity prices and strong external demand. Imports remained relatively muted in November, according to the CBR's estimates, due to the weaker ruble and a slight softening in domestic demand. The full year estimate for the trade surplus is $165bn.

Reserves are likely to continue to rise in 2022 and analysts predict the current account surplus will reach $125bn for the full year. Moreover, the CBR is planning to divert more cash to the National Welfare Fund (NWF). In the new 2021-2023 budget the cap on money that can be used for investment from the rainy day find was raised from 7% of GDP to 10% of GDP, which means the amount of money in the NWF is likely to increase in 2022 and 2023, making Russia even more sanction proof.

Part of the reason for this caution is that Russian President Vladimir Putin has forced the international community to open talks on a new security deal by threatening Ukraine with military action after troops at the Russian bases near Ukraine were increased.

Putin has warned that he will break off relations with the West completely unless a new security deal can be agreed. The West, led by the US, has threatened extreme sanctions against Russia if it takes any military action against Ukraine.