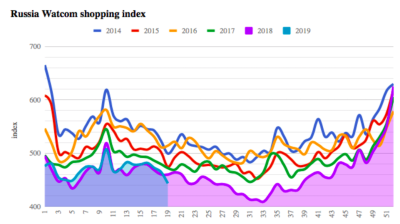 There was not much change in the Watcom Shopping index over the May holidays as the index continues to underperform every year for the last six years
By bne IntelliNews May 29, 2019

There was not much change in the Watcom Shopping index over the May holidays as the index has continued to underperform every year for the last six years.

The Watcom index records foot traffic in Moscow’s biggest malls in real time by using the CC cameras and gives an immediate insight into Russian consumer trends and mood.

Retailers have become more active in promoting sales and the traditional long May holiday weekend was extended in most malls that have been trying to pull in the punters by offering more in the way of entertainment and kid-friendly environments.

The May break is an important holiday that is capped by Maslenitsa (Butter week), or the old rites of spring festivals where pancakes are eaten to symbolise the return of the sun.

For shoppers it is also time to stock up on supplies for the “dacha” or summer house.

On the 18th week of this year the shopping index was up 5% compared to the previous year.

“The main reason was preparation for the dacha season. During the 19th week shopping index in Moscow decreased by 3.6%, which was due to the fact many people stayed at their dachas or went abroad during the holiday," says the report.

Consumption has been held back by incomes that have been stagnant for five years. The Ministry of Economy was predicting a 1% growth in real incomes for this year, but after GDP growth came in at only 0.8% of GDP in the first quarter – well below consensus – the ministry warned at even that prediction is in danger and 2019 will probably been another year of stagnation for incomes.

On the ground, each shopping mall is faring differently they as they grapple with the difficult environment.

“In Vegas Crocus City, for example, on the 18th week the decrease in the index was 6% LFL while on the 19th week it accounted for 3%.In Vegas Crocus Kuntsevo the traffic grew by 23-24% compared to the analogous period of 2018 due to the fact that shopping centre was opened 1.5 years ago. In the Shopping Centers “Stolitsa” (small format) there were no changes during the 18th week. On the 19th week Shopping Index decreased by 4.2% LFL compared to 2018 due to the weather, first and foremost. This factor is critical for «small format» shopping centres,” Watcom said in a report.