Russia’s labour market recovering, unemployment falls to 5.1% in May 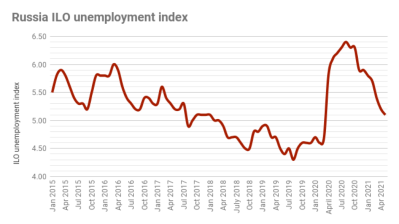 Russia's labour market is recovering, with unemployment down to 5.1% in May as the economy recovers, but there is a still a shortage of migrant labour, especially in the agricultural sector. / bne IntelliNews
By bne IntelliNews July 1, 2021

Russia’s labour market further extended its gains in May, as unemployment declined to 5.1% in line with Bloomberg consensus projections, and the real wages gain was revised up to a whopping 7.8% year on year in April, partly due to low base effects, according to RosStat latest data.

The labour market strength is set to translate into firm consumer demand, as retail sales turnover for May also jumped by a strong 27.7% y/y on low base effects, but still in the black in seasonally adjusted terms.

Consumption-driven sectors in particular have quickly closed the corona pit this year and household demand was exceptionally strong in April.

Retail trade was already clearly higher than before the crisis. Other service sectors have also recovered briskly, but their production was still 6% lower in April than in 2019. The production of services contracted the most sharply last spring, as interest rate restrictions hit many service sectors in particular, but the Russian services PMI bounced back strongly in May and Russia's base sectors showed more signs of strong economic recovery in April 2021, according to the latest data from RosStat.

Overall unemployment in Russia is now holding at 5.1%, but by the end of 2021 it will drop to 4.6-4.7%, which is the pre-crisis level of 2019, Labour and Social Protection Minister Anton Kotyakov said in an interview with TASS at the St. Petersburg International Economic Forum (SPIEF).

Unemployment is being driven down by the economic recovery but that has still not progressed far enough to entice migrant labour from the other Commonwealth of Independent States (CIS) countries back to Russia, many of whom decided to stay home last year because jobs dried up and also because the ruble’s devaluation made working in Russia less profitable.

The Ministry of Agriculture and Russia Railways (RZD) are reportedly planning to charter trains to bring migrant labourers back to meet the seasonal labour needs for the agricultural sector.

Russian President Vladimir Putin has already ordered a moratorium on the expulsion of labour migrants in Russia without a legal basis for staying until September 30, giving them more time to apply and sort out their legal status.

The agricultural sector is currently forced to bring in labour by using flights, which significantly increases the cost of said labour. Regional governments have been lobbying the ministry to help on this front because those costs are filtering into food production, inevitably nudging prices higher, which is already a problem.

The estimated labour shortage in Moscow alone is 300,000. In Tatarstan, regional authorities estimate the decline in the number of available labour migrants is around 33% and even doubling salaries for jobs in construction, for instance, still isn’t enough to ease the labour shortfalls.

One of the other trends over the last year has been the shift in Central Asian migrant labourers’ preference to go to Kazakhstan, where earnings may be lower, but they face fewer problems and risks.

Russia’s industrial output decline slows to only 0.1% in August
10 hours ago
Putin's popularity remains high, but even after a hit in September it is still at 77%
10 hours ago
Russia on track to have a record-smashing grain harvest
2 days ago
Bosnia posts annual CPI inflation of 16.8% y/y in August
2 days ago
IMF sees Romania’s economy growing by 4.8% in 2022, analysts are even more bullish
3 days ago