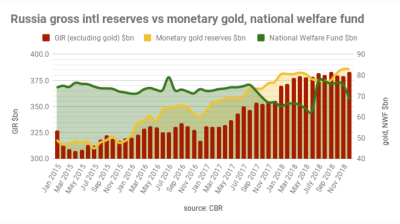 The CBR began actively buying gold and increasing the yellow metal’s share in the reserve basket since 2007, but the purchases have accelerated recently as Russia attempts to protect itself from possible “crushing” sanction by the US this year.

Previously in 2018 the CBR caused a stir in the international bond markets by apparently dumping 84% of its holdings in US treasury bills, or about $100bn worth of bonds, bringing its holding in the world’s favourite gross international reserves (GIR) instrument down to a mere $14.9bn.

Also in October a package of measures aimed at lowering Russia's dependence on the US dollar was prepared by the CBR, the finance ministry, and the Ministry of Economic Development.

At the same time the CBR has dramatically increased the amount of Chinese yuan it holds as a reserve currently, which was up to 15% of the total as of the end of 2018 from 5% at the end of the first quarter of last year, reports Bloomberg. That is way beyond China’s share of Russia’s trade, which topped a record $100bn in 2018, but only 14% of these deals are settled in yuan and 7-8% are settled in rubles, according to the Ministry of Finance.

The CBR bought $44bn worth of the Chinese currency in the second quarter of 2018 and Russia held $67bn in yuan as of mid-2018, the last data available as the CBR releases GIR details with a six month lag.

China’s yuan has become the fourth largest component of Russia’s international reserves after the euro (32%), the US dollar (22%), and gold (17%).

Stockpiling gold has been a good bet. The backdrop of the general geopolitical brouhaha drove up the value of gold by 13.4% in 2018 so the CBR pile is now valued at $86.9bn from total reserves of $468.5bn as of December 2018.

Russia is now the fifth largest holder of gold in its reserves among the world's central banks. The first four places on this indicator are occupied by the US, Germany, France and Italy.

The central bank earlier disclosed that in the second quarter of 2018, it reduced the share of dollar-denominated assets in gold reserves from 43.7% to the lowest in history of 21.9%.

The central bank buys gold from Russian commercial banks, but the size of its future purchases is a state secret. It remains unclear if the CBR will continue the policy of buying gold in 2019, as it has been adding some 14% year to its gold pile a year recently.

Industry sources say that the central bank buys a significant part of Russia’s gold production, which is growing more slowly than the regulator’s appetite.

The state’s growing hunger for gold may be behind the decision to finally award the rights to exploit the Sukhoil Log gold deposit, the largest proven gold deposit in the world, to Polyus Gold last year after a quarter of a century of wrangling.

Russia is the third largest gold producer in the world. In January – December 2018, 8.5mn ounces (265 tonnes) were produced in the country.