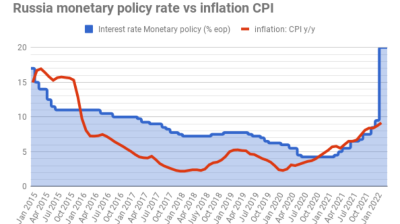 The board of the Central Bank of Russia (CBR) at the policy meeting of March 18 resolved to keep the key interest rate unchanged at a record-high 20%, after an emergency hike following Russia's military invasion of Ukraine.

The regulator sees the economy entering a "phase of large-scale structural revamp" that will be accompanied by a "short but inevitable" period of inflation spikes. The CBR now expects the inflation target of 4% to be reached no sooner than 2024 (end-2022 previously), without providing a specific inflation guidance.

The military invasion of Ukraine has forced the CBR to hike the key interest rate to a record-high 20% to contain rapid ruble devaluation.

Maintaining the key rate at an emergency 20% was largely predicted by the analyst surveys of Bloomberg and RBC. The analysts surveyed by RBC business portal believe that without a further significant deterioration of the external environment, the CBR is likely to maintain the key rate at 20% throughout 2022.

"The central bank is positive about the effectiveness of the previous emergency rate hike in preventing depositors from fleeing the banks and maintaining financial stability. The rhetoric of the press release looks balanced," Renaissance Capital commented on March 18.

"We expected CBR to not make any changes and to remain committed to preventing uncontrolled price increases. Going forward, the key issue should be stabilising the banking system and encouraging people towards ruble-denominated deposits, as well as addressing liquidity conditions on the FX market," Sova Capital commented.

While risks to economic activity clearly come to the fore, Renaissance Capital analysts see "no indication that a further rate hike might be on the table" and maintain the view that the next move will be a rate cut, most likely in June.

At the same time Sova Capital analysts believe that with inflation risks skewed to the upside following further supply and logistics shocks, an additional monetary tightening in the coming months could be possible to support demand for deposits, which should keep real rates positive.

The CBR cancelled the usual policy press conference of Governor Elvira Nabiullina, and is set to release a statement instead. After the nomination of President Vladimir Putin, the lower house of parliament’s council will consider the proposal for a new five-year term for Nabiullina on March 21, according to a March 18 statement on the State Duma’s website.

"That is great news," chief economist at Alfa-Bank Natalia Orlova told Bloomberg, adding that "her [Nabiullina's] third term gives hope that the structure of inflation targeting will not be completely destroyed."

Up until March 16 Kremlin spokesman Dmitry Peskov refused to confirm that Putin will propose Nabiullina for reappointment. Last week Peskov had to refute the rumours that Nabiullina had requested to resign amid the miliary invasion of Ukraine.

Nabiullina was reinstated for a five-year term on March 22, 2017. She is credited with steering Russia through the 2014-2015 recession by free floating the ruble and targeting inflation, which was reined in to its lowest level in post-Soviet history during her tenure. The CBR under Nabiullina also launched a clean-up of the banking system, withdrawing over 300 banking licences and cutting the number of banks by almost a third.

In 2016, the UK-based finance magazine The Banker named Nabiullina as the European central banker of the year. Born in 1963, Nabiullina served as Russia’s economic development and trade minister between September 2007 and May 2012 before being appointed to head the CBR in June 2013. She also served as an advisor to Putin on economic issues between May 2012 and June 2013.

Nabiullina famously uses her attire and a choice of brooch to telegraph messages during her press conferences. The Bell wrote after the press conference on March 1 that she wore all black and did not have a brooch, as Nabiullina was announcing de-facto currency and capital controls in Russia.