Russia objects to Donbas conflict portrayal by new US administration 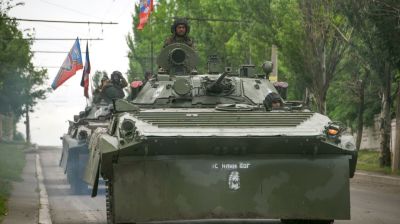 The Kremlin on February 6 took issue with the new US administration’s portrayal of the Donbas conflict in East Ukraine after the White House reported a phone call held at the weekend by President Donald Trump and Ukrainian President Petro Poroshenko.

“There is no conflict between Ukraine and Russia. Donbas is solely an internal Ukrainian conflict,” Kremlin spokesman Dmitry Peskov said about the White House statement after the presidents’ conversation on February 4, TASS news agency reported.

The brief White House readout said that the new US leader had a “very good call” with Poroshenko “to address a variety of issues including Ukraine’s long-running conflict with Russia”. “We’ll work with Ukraine, Russia, all other parties, to help them restore peace along the border,” Trump is said to have told Poroshenko.

Other Russian commentators pointed out that the almost three-year insurgency in the predominantly Russian-speaking Donbas is also not a border dispute, but rather an uprising intended to wrest the industrial region from Kyiv’s control.

According to the official narrative from Moscow, Russia has no direct conflict with Ukraine and is merely using its close ties with the rebels to assist international efforts to end the fighting. Moscow also rejects broad claims backed by extensive evidence, including the capture of Russian military personnel in Donbas, that it is actively supporting the rebels with troops and weapons.

Kyiv in turn consistently refers to Russia as the aggressor in the conflict and says Moscow has thousands of regular troops fighting on Ukrainian soil.

Around 10,000 people have died in the conflict that broke out in spring of 2014 after the pro-Russian government of President Viktor Yanukovych was toppled in Kyiv and Russian forces seized Crimea from Ukraine.

After taking office on January 20, Trump made his first direct phone contact to Russian President Vladimir Putin a week before he spoke to Poroshenko.

When asked if it’s important for the Kremlin whether the US leader holds talks in person first with his Ukrainian or Russian counterpart, Peskov said he could not comment on “the foreign policy priorities of other countries, including the United States”.

“If these meetings in any case somehow contribute to settling the inter-Ukrainian conflict, we will be only glad,” the spokesman said.

Both Moscow and Kyiv accuse the other of undermining the Minsk peace accords on the conflict reached in the Belarusian capital in 2015. During a visit to Hungary this month, Putin turned up the rhetoric, saying the Ukrainian leadership wasn’t interested in ending the fighting because of the benefits it brought.

“Cause number one [of the continuing conflict] is that the Ukrainian leadership needs money today and the best way to get it is to squeeze it out of the EU, or from separate European countries or from the US or from international financial institutions by showing itself off as a victim of aggression,” Putin said.

Meanwhile, the new US administration’s future policy on the conflict has yet to become clear as Washington seeks to improve relations with Moscow. The Ukrainian government fears it will lose the support it previously enjoyed from the administration of former US president Barack Obama.

However, Washington’s ambassador to the United Nations, Nikki Haley, told the assembly on February 3 that the US condemns the Russian aggression in Donbas. “We do want to better our relations with Russia,” Haley said in her testimony. “However, the dire situation in eastern Ukraine is one that demands clear and strong condemnation of Russian actions.”

On February 5, US Vice President Mike Pence said in an ABC News interview that the Russian government’s attitude in the next several months will also determine whether economic sanctions remain in place. Russia is interested in combating Islamic State (IS) and President Trump will examine ways to renew relations for the sake of cooperation with that goal, Pence said.

“The statements offered by Trump and his team reveal a firm and consistent policy on Russia that is mostly in line with the track set by former President Obama,” Zenon Zawada, an analyst with the Kyiv-based brokerage Concorde Capital, wrote in a research note. “The main exception being is that we have long understood that Trump would be looking for ways to remove sanctions against Russia and bring it back to the global community.”

It’s a positive sign that Trump finally spoke with Poroshenko about the conflict in Donbas, Zawada added. “We expect Trump to move forward on his cooperation with the Russian government in fighting the Islamic State, but not without peace in Ukraine. Creating that incentive just might be the out-of-the-box solution that enables a breakthrough in the current impasse.”