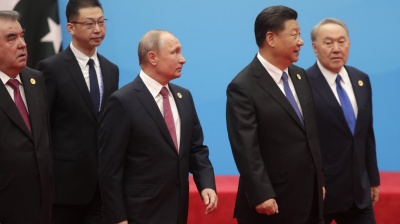 Russia is hopeful that its second-largest trading partner will fill an EU-shaped hole. / Image: bne IntelliNews.
By Theo Normanton in Moscow March 5, 2022

Since Russia invaded Ukraine on 24 February, it has faced hard-hitting sanctions from some of its biggest trading partners, including the EU, America, Canada, the UK and even Switzerland. The economic hit from these sanctions is set to equal that of the 1998 debt crisis. Goldman Sachs Group Inc. Bloomberg Economics estimates that the Russian economy will shrink by 9% in 2022, according to the most recent estimates.

Russia’s exports will be particularly severely affected. JP Morgan predicts that Russian exports to shrink by around 13% this year. Now that some Russian banks have been cut off from international payments system SWIFT, it will be harder for Russia to receive payments in exchange for exports, which is likely to further dent export revenue.

Some commentators speculate that China could step in to fill the trade shortfall left by western sanctions. It is clear that Russia has been pivoting towards Chinese trade over the last few years. In 2021, trade between the two countries totalled $174bn, up 36% on the year before.

Putin appears to have been laying the groundwork for a decreased dependence on western money in recent months. In his visit to Beijing in February to attend the Winter Olympics, he concluded a deal to boost trade by $250bn by 2024.

Much of this money will come from energy. Putin recently unveiled a new oil and gas deal with China, which will be worth around $120bn. Energy accounts for more than half of the value of Chinese imports from Russia.

Coal is another big player in the renewed Sino-Russian trade partnership. China is Russia’s largest coal importer, and announced a new coal trade deal worth $20bn just a week before Russia began its invasion of Ukraine.

Agriculture is another area with significant potential for expansion. Russia is the world’s biggest exporter of wheat. Like energy, wheat is one of the Russian products which the West is unlikely to sanction, but increased demand is always welcomed. China aligns more closely with the nations which import rice, rather than those which import wheat, but is a big consumer of both. It was therefore a big boost for Russian agriculture when the Chinese authorities announced the lifting of all restrictions on Russian wheat and barley on the day that Russia sent its troops into Ukraine. Previously, health regulations had limited these imports.

Year of the paper tiger

For all that the Kremlin may be touting these new trade deals as the solution to Russia’s sanctions woes, though, China’s stance on the war in Ukraine suggests otherwise.

The Beijing-headquartered Asian Infrastructure Investment Bank (AIIB) paused all investment activities in Russia and Belarus on March 3. More than 25% of the bank’s voting power is held by China, which is its largest shareholder.

AIIB’s senior management team has very diverse international background and its president, Jin Liqun, is one of the most respected figures affiliated with the Chinese state. He’s a progressive and a reformist. While the bank’s stance on the war is not necessarily indicative of the Chinese government’s position on Russia, it suggests that China’s attitude to Russian trade is not unambiguous; as does China’s decision to abstain from the UN motion to condemn Russia’s invasion, rather than to vote against it.

Even if China were resolved on supplementing Russian trade, it would not compensate for the money being lost from the West. The EU is Russia’s single largest trading partner – accounting for twice the amount of trade Russia did with China last year.

Russia is competing with Saudi Arabia for energy exports to China. Only 20% of Russian energy went to China last year, compared with more than 50% to the EU. The Power of Siberia 2 pipeline agreed between Russia and China is worth merely a fifth of the Nord Stream 2 project, which was suspended by Germany after Russia declared Luhansk and Donetsk independent.

With Russia-EU trade down around $110bn since the annexation of Crimea in 2014, it is clear that it will only fall further in response to this fresh round of sanctions. Sino-Russian trade would have to almost double to fill that gap, and that means branching into new areas.

In light of export bans of semiconductors to Russia from western countries and Japan, it seems unlikely that technology will be the golden ticket for Russia. There is some scope for increased collaboration with weapons deals, which currently make Russia around $15bn per year, and are largely with China and India, but this alone is not enough.

To truly cut its dependence on European finance, Russia would have to integrate further with China. Only one Chinese bank was registered on Russia’s equivalent of SWIFT (the Society for Worldwide Interbank Financial Telecommunications) in 2021, while only 17% of existing trade between Russia and China is in yuan.

It remains possible that the new sanctions – including freezing Russia’s foreign currency reserves abroad – could stimulate a move away from dollars on the international stage, facilitating trade using yuan, rubles and even cryptocurrencies. But Russia’s de-coupling from the global markets is taking place at an alarming rate. It will take more even than China’s fulsome support to reverse that trend.