Russia enjoys $2.4bn windfall from Brexit in the last 24 hours

Russia has built up massive reserves of gold since 2006 and the price of the yellow metal spiked on the news.
By bne IntelliNews June 24, 2016

Russia just made a cool $2.46bn paper profit in the last 24 hours from the UK’s decision to leave the EU. Russia has built up massive reserves of gold since 2006 and the price of the yellow metal spiked on the news. But sterling also makes up a big chunk of the country’s hard currency reserves and the value of the pound crashed, which took some of the edge off its windfall.

Despite the collapse of oil prices over the last year, Russia’s foreign currency reserves have been increasing thanks to the positive current account surplus, maintained by a collapse in imports. Gross international reserves reached their highest level this year in mid-June of $393.9bn.

As part of its showdown with the the West, Russia has been rapidly increasing the share of gold it holds in its reserves; since 2006, it has added 2-6 tonnes of gold to its vaults a month. Russia is trying to wean itself off the dollar and turned to gold as a replacement as a store of value for its national reserves. 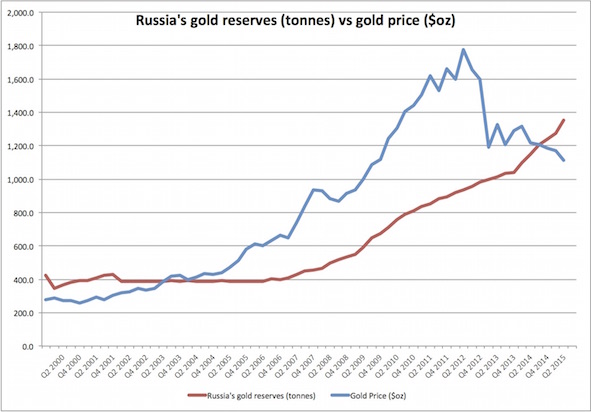 The share of gold in Russia’s reserves has risen from 2% in 2006 to 13% today, or about 1,352 tonnes, as of the end of the first quarter of this year, according to the Central Bank of Russia (CBR).

The value of that pile jumped overnight as gold prices spiked on the Brexit decision. Gold prices have rallied strongly since the start of the year from around $1,000 per troy ounce to $1,266 on the eve of vote on June 23, before jumping by nearly $100 as the news broke. That earned Russia a $3.7bn one-off windfall from Britain’s decision to abandon its European colleagues on gold reserves that were worth about $54bn at the start of this week.

Unfortunately, some of that windfall was immediately eaten up by the concurrent tumble in the value of the pound, which fell 8.3% in pre-market trading between the close on June 23 and the open the following day. About 10% of the CBR’s hard currency reserves are held in sterling so the currency crash wiped approximately $1.2bn off the values of its reserves in the same day, leaving the central bank just $2.46bn better off.