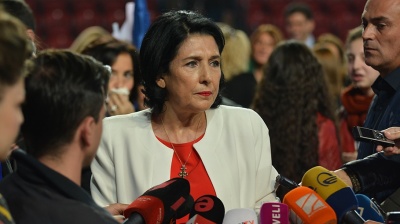 Some Georgian voters afraid of renewed military clashes with Russia may have switched to Zurabishvili who has said relations should be balanced between the West and Moscow.
By Iulian Ernst in Bucharest and Will Conroy in Prague November 29, 2018

Ex-Georgian foreign minister Salome Zurabishvili won the presidential runoff ballot in Georgia on November 28, according to final preliminary results issued after the counting of more than 99% of the votes.

The 66-year-old French-born diplomat will become the country’s first woman president. She stood as an independent candidate but was endorsed by the South Caucasian nation’s ruling Georgian Dream party—led by billionaire oligarch and former PM Bidzina Ivanishvili—which provided her with very substantial support that grew far more intense after she only very narrowly carried the election’s first round at the end of October.

According to the country’s Central Electoral Committee (CEC), Zurabishvili received 59.6% of votes, giving her a wide margin of around 20pp over her opponent Grigol Vashadze, a fellow ex-foreign minister and the candidate of the United Opposition led by the centre-right United National Movement (UNM). The turnout was 56.2%, nearly 10pp more than in the first round vote.

Role countering judicial corruption
Though the powers of the presidency have been cut under the new Georgian constitution, the incoming president is still expected to play a critical role in addressing widespread suspicions of the prevalence of corruption in Georgia’s judiciary.

“The president has the power to appoint three judges to the constitutional court and a member to the high council of justice,” noted Max Fras, an expert on Georgia and visiting fellow at the London School of Economics’ European Institute, in comments made to Euronews. “They can tip the balance of power and make the judicial system have more integrity".

Despite being very much regarded as the candidate of Georgian Dream—seen as Big Tent but self-described as centre-left—Zurabishvili's future line as president remains largely unpredictable.

"[S]he is not a totally known quantity. She might just go rogue and become more independent than [incumbent Giorgi] Margvelashvili", Fras also commented.

Impact of Sea of Azov clash
One interesting aspect of the last few days of campaigning prior to election day was the impact on Georgian voters of the Sea of Azov naval clash between Russia and Ukraine over Moscow’s tightening blockade of the Kerch straits in the Crimea region. Georgia and Russia fought a brief war in 2008 and some Georgians may have become wary of voting for Vashadze, the more pro-Western of the two candidates. Zurabishvili has called for Georgia’s relations with the West and Moscow to be balanced.

Prior to the vote, Forbes contributor Melik Kaylan wrote: “Essentially, the race is between a ruling party candidate who has made herself controversial with thinly disguised pro-Moscow remarks and a pro-Western opposition candidate.”

Russia has troops stationed in the breakaway Georgian provinces of South Ossetia and Abkhazia, keeping many Georgians on edge over possible renewed hostilities. As Kaylan also commented: “Ukraine and Georgia identify their fates very closely with each other. The Kremlin's actions in one country mirrors its actions in the other. Provocation of separatists, invasion, dismemberment and absorption of territory. If you're Georgia or Ukraine, you earn a quiet life if you opt for a reasonably neutral national leader—or an outright pro-Moscow one. But if you choose one hostile to Russia, you incur automatic consequences. In short, Moscow's highly public attack on Ukrainian ships is also a warning to Georgia and Georgians to stay in line.”

Saakashvili claims “mass electoral fraud”
In principle, the victory of Zurabishvili, born in Paris after her parents fled Georgia after its annexation by Soviet forces, should prevent major disruption to the direction taken by the country’s government, despite a call for public disobedience made soon after the polling stations closed from the man widely regarded as the informal leader of the opposition—self-exiled former president Mikhael Saakashvili, who claimed “mass electoral fraud” in an address on pro-opposition television channel Rustavi-2.

"I urge Georgians to defend our freedom, democracy, and the law. I call on you to start mass peaceful rallies and demand snap parliamentary polls," Saakashvili, who was president at the time of the five-day Russo-Georgian War, said.

The defeated candidate Vashadze did not endorse the radical intervention from Saakashvili but announced on a more moderate note that the United Opposition would make a statement on its future strategy on November 29. Declining to concede to Zurabishvili, he added that he was awaiting the final official election result.

Some commentators said Zurabishvili may have exhausted her base in the first-round voting, prompting Georgian Dream and the country’s richest man, Ivanishvili, to go to extraordinary lengths to deliver her more of the ruling coalition’s voters. Ten days ago allegations flew over the ‘buying of votes’ as news broke of the Cartu Foundation, controlled by Ivanishvili, buying a bundle of bad loans owed by small debtors worth GEL1.5bn ($560mn, equivalent to 3.5% of Georgia’s GDP).

Voting at most of the polling stations throughout Georgia was broadly in line with the procedures prescribed by the law, the International Society for Fair Elections and Democracy (ISFED) said. However, outside of polling stations, the mobilisation of coordinators and supporters of Georgian Dream and of Zurabishvili was on a massive scale. They tracked voters who arrived in the precincts, in an approach that amounted to a continuation of “the infamous malpractice of attempting to influence voters’ will”, according to the NGO.