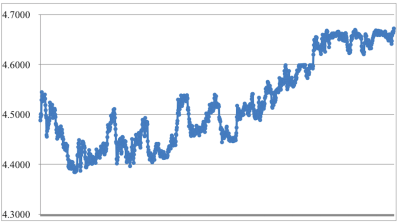 The Romanian currency, the leu, hit an all-time low against the euro on January 9, with the central bank setting the reference exchange rate at RON4.6722 to the euro.

The decline of the Romanian leu comes after one day after the central bank decided to maintain the key rate unchanged, while central bank governor Mugur Isarescu criticised the latest tax on bank assets decided by the government.

"The EUR/RON tested the upside for most of yesterday’s trading session, closing just below 4.6700," ING analysts said in a note issued on January 9.

"NBR governor Mugur Isarescu avoided any statements regarding the exchange rate in the press briefing following the Board meeting. However, with the central bank apparently less concerned about the inflation outlook at least in the short term, we expect a shift higher in the comfort range for the EUR/RON. Timing remains a tough call though."

At the end of last year, the Romanian finance ministry decided to introduce a tax on assets which banks will have to pay according to the ROBOR evolution.

The tax was harshly criticised on December 8 by Isarescu, who called it “a bomb hard to understand,” according to Ziarul Financiar. According to Isarescu, the tax affects not only the commercial banks, but also the flexibility and efficiency of the monetary policy.

“This strange idea took us by surprise too. The main discontent element is that it has not been discussed with the industry. You first discuss it with the banking industry and don’t come at the end of the year, before Christmas, with a bomb hard to understand,” Isarescu said. “I believe the finance minister will discuss it with the industry. They also have inquiries about the way it is applied. I must admit we do too. There are aspects we hardly understand,” he added.