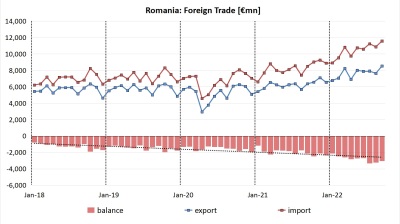 Romania's trade deficit (goods only) increased to nearly €9.6bn in Q3, or by 59% y/y, the statistics office announced.

The monthly data reveals a certain moderation, in the sense of a comparatively smaller deficit in September (+43% y/y), reflecting softening private demand and economic activity — the trends that shaped the economic landscape in the whole of H2.

Growth of Romania’s foreign trade (exports, imports and deficit) accelerated in the third quarter of the year, partly driven by the prices rising globally, particularly energy prices (nominal effect) and this is expected to continue in Q4 — before slowing down in 2023 and in the following years. The trade gap is expected to keep growing at significant rates in the next few years, though.