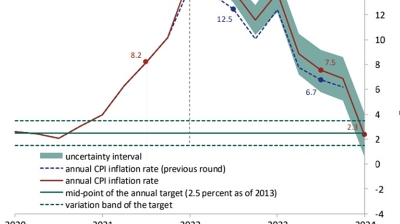 The war in Ukraine has kept fuelling supply-side issues in some key commodity markets, Romania’s National Bank (BNR) argued in its August 2022 Inflation Report, estimating that the projected annual CPI inflation rate will reach 13.9% in December 2022, compared to 12.5% in the May 2022 Inflation Report.

Although the National Bank of Romania (BNR) governor Mugur Isarescu explained the local currency's slight strengthening in recent weeks by the forex inflows generated by the diaspora returning home for the summer season (as opposed to the BNR’s interventions), he implied that the monetary authority will remain active and not leave the national currency to weaken below RON5 to the euro.

The nominal exchange rate is one of the very few credible anchors the National Bank can use to control inflationary expectations, he explained.

This goes against the International Monetary Fund’s (IMF’s) recommendations, included in the Article IV Conclusions in June and can be interpreted as temporarily “suspending” the external economic competitiveness argument — possibly because of its diminished relevance during a transitory regime of unusual energy and food prices.

“As external competitiveness has weakened and to help absorb external shocks, exchange rate flexibility should be increased over time, together with the necessary fiscal consolidation,” the IMF recommended in June.

However, Isarescu preferred to stress the role of “anchor” played by the exchange rate — a role the Fund admitted as relevant in the past. “In Romania, we have not many anchors that the public can trust,” he said.

“That's the last thing we’ll let happen: get the exchange rate out of control. The inflation rate will stabilise this quarter. It is possible that in August we will see some increases, but gradually, the tendency is to decrease,” declared Isarescu when presenting the Inflation Report. The BNR governor stressed that he will continue to use this policy tool and assured that one euro will be worth less than RON5 as long as needed.

“You can't let go of an instrument of control when you have a war so close," he stressed.