Retail sales in Romania flat in January amid rising uncertainty 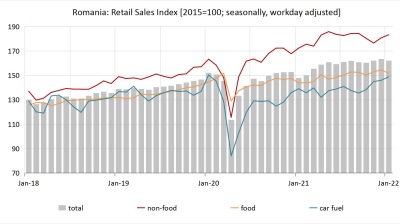 The retail sales volume index, seasonally adjusted, contracted by 0.9% m/m in January, returning to the level of November 2021 and consolidating the flattening seen over the second half of 2021, according to the latest data released by the statistics office INS.

As uncertainty remains high in terms of inflation and energy bills households’ consumer confidence is unlikely to strengthen significantly over the coming quarters. Just like the government, households will reconsider their yearly budgets in line with the slower growth expected and higher risks ahead.

The seasonally-adjusted index has hovered around the same level, within a narrow band, during the second half of 2021 as the uncertainty about inflation and energy bills depressed households’ propensity for spending. The war in Ukraine pushed the level of uncertainty to record levels.

In annual terms, retail sales in Romania increased by 3.4% y/y in January, while the index advanced by 7.0% compared to January 2020.

The rise of non-food sales remains thus robust in the medium-term — but even here, sales have remained more or less constant since April last year (in seasonally adjusted terms).