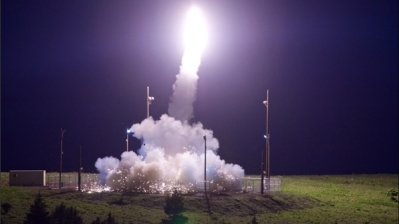 Iranian news agency Fars put out this launch photo after the missile strikes were announced. / Fars.
By bne IntelliNews January 8, 2020

The al-Assad and Erbil airbases were hit, according to US Defence Department spokesman Jonathan Hoffman, saying it was clear “that these missiles were launched from Iran”.

Trump seemed relieved by initial assessments of damage and casualties after the attacks, tweeting: “All is well!” He added: “Assessment of casualties & damages taking place now. So far, so good!” There were reports that US officials opted not to go ahead with a possible Trump evening address to the nation.

Iranian Foreign Minister, Mohammad Javad Zarif, said on Twitter: “Iran took & concluded proportionate measures in self-defense under Article 51 of UN Charter targeting base from which cowardly armed attack against our citizens & senior officials were launched. We do not seek escalation or war, but will defend ourselves against any aggression.”

It was not clear whether the relatively conservative missile attacks on bases that were on high-alert would bring an end to Iranian military reprisals for the death of the general, the head of the elite clandestine and expeditionary al-Quds Force of the Islamic Revolutionary Guard Corps (IRGC) who was widely recognised as Iran’s second most powerful official.

Iranian state media put out reports claiming at least 80 US casualties in the strikes, but they looked highly dubious—however, such claims may give Iran officials the chance to claim “victory” and essentially offer Tehran and Washington a way out of the crisis. Iran would then return to its usual campaign of proxy warfare, avoiding a direct military confrontation with a superpower.

IRGC officials were cited by Iranian media outlets as warning that if the US retaliated for the missile strikes Israel could be attacked. Some reports also said Gulf localities such as Dubai would be targeted in the event of an American response.

The IRGC announced the start of the missile strikes with a statement reading: “The brave soldiers of IRGC’s aerospace unit have launched a successful attack with tens of ballistic missiles on the al-Asad military base in the name of martyr General Qasem Soleimani.”

The attack commenced around 01:30 local time (22:30 GMT). Tasnim news agency reported a second wave of strikes against the al-Assad base took place at around 03.20. Iranian state media outlets said Iran had launched fighter jets but their mission appeared to have been merely to protect Iran’s air space.

The sprawling al-Assad air base is located about 60km west of Baghdad. It has been visited by Trump and US Vice President Mike Pence in the past 18 months. It is estimated to host around 1,500 foreign troops. The US base in Erbil is to the north of Iraq. It has served as a special operations hub, home to hundreds of troops, logistics personnel, and intelligence specialists.

Earlier on January 7, the secretary of Iran’s national security council, Ali Shamkhani, said 13 “revenge scenarios” were being considered in the wake of the assassination. Even the most limited options would be a “historic nightmare” for the US, he said.