PwC says Russia to be biggest European economy by 2050

DMs will lose out to EMs by 2050 as their relative economic power wanes
By Ben Aris in Berlin February 8, 2017

Russia will be the biggest economy in Europe by 2050, consultants PwC said in a report on February 7 in its latest instalment of “The Long View: How will the global economic order change by 2050”.

This is not the first time PwC has made this prediction. Russia was well on track to overtake Germany, currently Europe’s biggest economy, much earlier than 2050 until the 2008 crisis struck.

Still, Germany’s economy is working close to full capacity whereas Russia’s remains well below its full potential. Despite the glacial pace of structural reforms, many of Russia’s sectors – mostly the apolitical ones not connected to raw materials – continue to grow fast, which will drive the convergence. And although Russia’s treasure trove of raw materials has often been described as a “curse” as they dissuade the government from making deep changes, the residual income from exports of hydrocarbons and minerals, irrespective of commodity market prices, gives Russia a huge advantage over its less well-endowed neighbours.

“In 2050, Russia will rise to sixth place in the global list of countries in terms of gross domestic product and will be the first country in Europe in this indicator,” according to PwC’s report.

China is already the world’s largest economy in purchasing power parity (PPP) terms since 2014, according to International Monetary Fund, and is well on its way to being number one in nominal terms too before 2050.

India will also push the US from second to third place by 2050, says PwC, which will be ahead of Indonesia and Brazil. Russia will come in sixth place and be the largest economy in Europe. Seventh place is given to Mexico, followed by Japan and Germany, and the top ten will close with UK.

Europe (and later the US) have enjoyed a long lead thanks to the scientific revolutions in the Renaissance and then the subsequent industrial revolution. However, following the end of the Cold War and the adaptation of modern market-based economies by nearly all the major countries, the emerging markets (EMs) have started the process of catching up and the developed markets (DMs) are losing their industrial and technological advantage. Geography is coming back into play, where simply being a big country will make a significant difference – and the BRIC countries, as well as many of their near peers, are all big populous places. This is true in Europe where Russia’s population of 146mn, despite its demographic problems, with remain half as large again as Germany’s.

The rise of Russia in Europe is part of a larger shift in balance of economic power well under way that will see the global centre of economic gravity move from the DMs to EMs. All the leading BRIC countries are expected to moving up the ranking in the next 25 years while the leading DMs will move down.

“We expect this growth to be driven largely by emerging market and developing countries, with the E7 [emerging] economies of Brazil, China, India, Indonesia, Mexico, Russia and Turkey growing at an annual average rate of almost 3.5% over the next 34 years, compared to just 1.6% for the advanced G7 nations of Canada, France, Germany, Italy, Japan, the UK and the US,” PwC said in the report.

“With the possible exception of Italy, all of the G7 will continue to sit above the E7 based on our rankings of GDP per capita in 2050. China achieves a middling rank by 2050, while India remains near the bottom. India’s GDP per capita trajectory over the next 34 years is markedly different to its overall GDP progression, illustrating that while strong population growth can be a key driver of GDP growth, it can also make it more challenging to boost average income levels,” the report continues.

“The gap is closing, however. In 2016, US GDP per capita was around four times the size of China’s and almost nine times that of India’s. By 2050, these gaps are projected to narrow to around double China’s and around three times India’s, demonstrating long-term income convergence,” PwC concludes.

The forecast takes into account the demographic situation, public investment in infrastructure, education and the dynamics of technological progress in each country. It assumes that the overall situation in the world will favour the economic growth of countries and there will be no serious threats to civilization, global catastrophes (like an asteroid collision with the Earth). 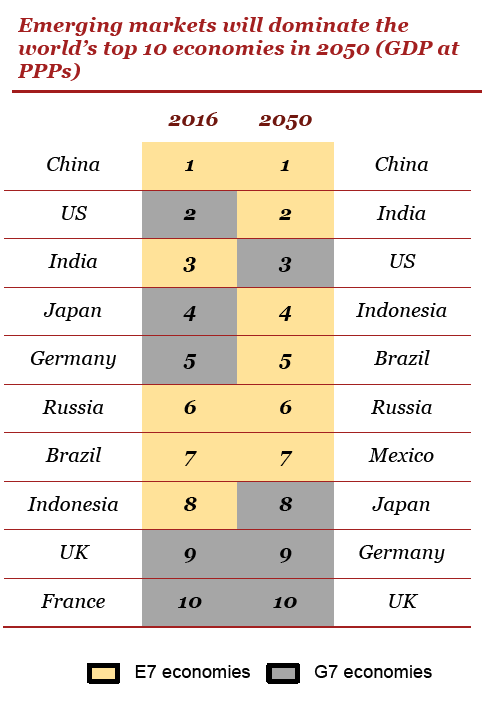 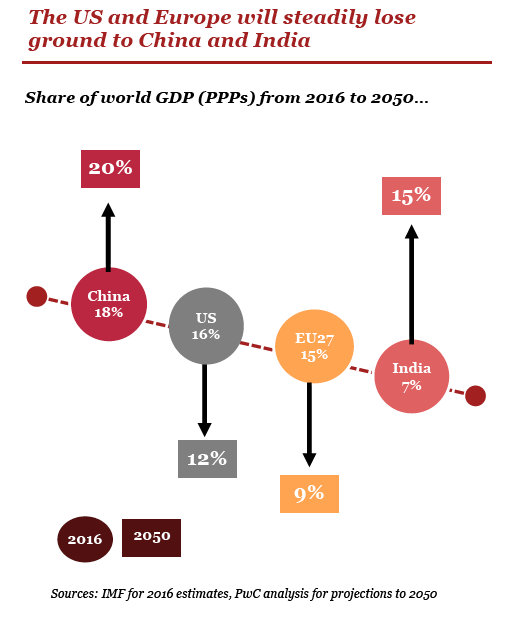 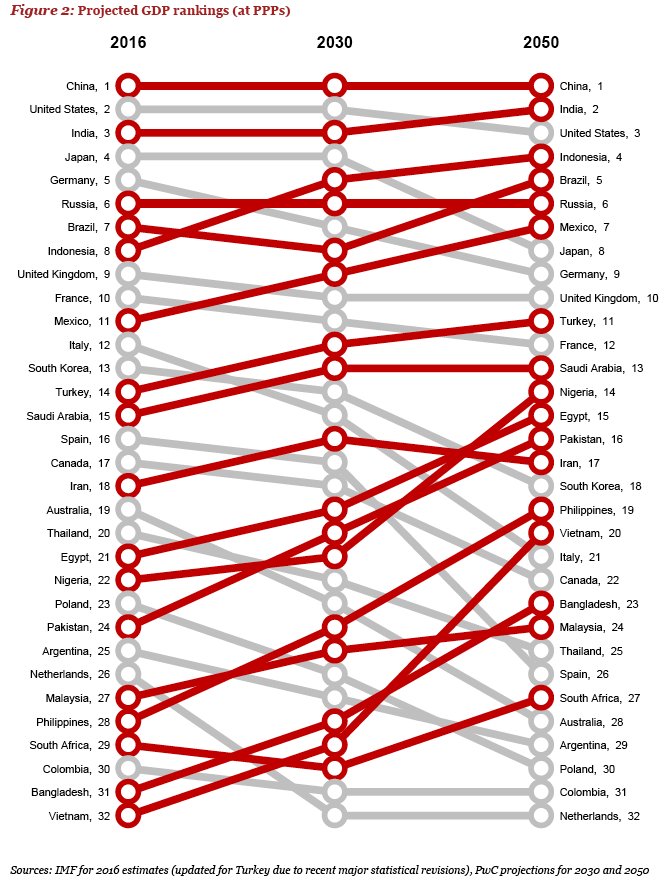