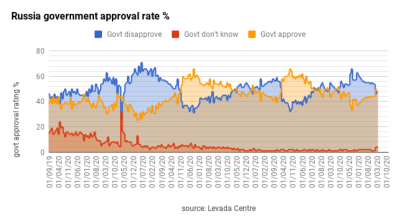 Russian President Vladimir Putin’s approval rating dropped 3pp in November to 65% from 68% in October, while his disapproval rating rose from 31% to 34% over the same month. 1% remain undecided in both months, according to independent pollster the Levada Center.

Despite the small fall, Putin’s approval rating has more or less recovered to its previous highs of over 65%, where it has been for years. His approval rating dropped to a recent low of 53% in April during the worst of the oil price and coronavirus (COVID-19) pandemic scare but bounced back into the 60s by June and was back at 66% by August after the lockdowns started to be removed.

The government has seen the opposite trend, with its approval rating actually rising in the summer as it responded to the crises to top 51% in September, with 47% disapproving, from the 44% approval rating it started the year with. In November the majority (50%) once again disapproved of the government, with 48% approving, but even 48% is a better rating than the government has enjoyed for years, where usually it has been polling in the high 30s or low 40s. All said and done, the government’s forceful reaction to the crises under the new prime minister, Mikhail Mishustin, has had a positive effect on its image, even if the population remains largely distrustful of it.

Russia’s regional governors remain amongst the most popular politicians in the establishment but saw their approval ratings slip somewhat to 60% in November from 62% in October and down from their recent high of 67% at the start of 2020, when the governors briefly overtook Putin in terms of popularity.

As the regions continue to develop and governors increasingly find themselves in competition with their neighbours – not only for investment but also in the effort to attract qualified and experienced workers – the regional governors have started to invest more into making their regions attractive, which has upped their standing with local residents. This trend has been bolstered by the Kremlin’s ongoing efforts at regional development that was kicked off by the billions poured into Sochi ahead of the Winter Olympics there, and followed up in another 11 regions during the World Cup in Russia. Going forward, this trend will continue to enjoy a tailwind from the RUB27 trillion ($365bn) of spending earmarked for the 12 national projects that are supposed to “transform” Russia (for which, read: Russia’s regions).

Despite the severity of the numerous crises in 2020, Russians' perception of whether the country is going in the “right direction” deteriorated by very little in November, dropping from 49% to 48% month on month, while those that think it is going in the “wrong direction” remained flat at 43%. Those unsure of which direction Russia is heading ticked up 1pp to 9%.

Likewise, the propensity to protest with political demands fell to its lowest level since 2017, with 23% saying protest might happen and 19% saying they would participate if they did, according to independent pollster the Levada Center.