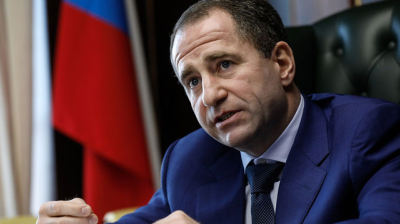 Russian President Vladimir Putin dismissed “the ambassador of war” Mikhail Babich, Moscow's ambassador to Belarus by a special decree on April 30, less than a year after his appointment.

Babich was also dismissed as Russia's special presidential envoy for development of trade and economic cooperation with Belarus.

According to the Kremlin' statement published on April 30, Putin was appointing Dmitry Mezentsev as the new ambassador in Minsk. Mezentsev has previously served as a regional governor in Russia and was a Russian official in the Shanghai Cooperation Organisation.

The war of words

Over the past months, Babich was locked in a bitter diplomatic row with Minsk. In March, Babich accused President Alexander Lukashenko of using anti-Russian rhetoric with the aim to mobilise Belarusian voters "against some imaginary enemy".

The diplomat also warned Minsk elites against "lecturing" Russia and its government on how to act in bilateral relations. According to Babich, Lukashenko's recent statements "are used to merely mobilise [Belarusian] voters against some imaginary enemy". "It is not quite sensible to use this technique at the expense of relations with your closest ally and brotherly nation," the diplomat added.

Later, Belarusian Foreign Ministry issued an insulting statement, in, which Minsk accused Babich of not being able to understood "the difference between [Russia's] federal district and an independent state", adding that the diplomat could demonstrate "respect" to independent country.

According to the Belarusian finance ministry, the country’s budget revenue losses from the tax manoeuvre in 2019 alone were estimated at BYN600mn ($300mn), and that the losses might total $2bn by the end of 2024. However, in December, Lukashenko's spokesperson said in a televised interview that Minsk already lost $3.6bn due to Russia's cut of energy subsidies to Belarus.

Due to Moscow's tax manoeuvre Belarus will lose extra $11bn within the next four years, the spokesperson added. The tax manoeuvre shifts the tax burden from export duty on oil and petroleum products to mineral extraction tax (MET) on oil production. It envisages a gradual reduction in the rate of export duty on oil and petroleum products from 30% to zero in the period from 2019 to 2024 and a proportionate increase in MET.

Putin appointed Babich as Moscow's new ambassador to Belarus, as well as the Russian president’s special envoy responsible for the development of trade and economic cooperation with this country, in August 2018.

Earlier, Babich served as Putin's envoy to the Volga (Privolzhsky) Federal District. He also headed the government of Russia’s Chechen Republic in 2002-2003.ac