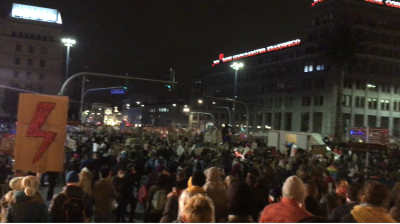 Protesters gather at Warsaw's De Gaulle Roundabout to set off a demonstration of 100,000 against the government-inspired ban on abortion. / Wojciech Kosc
By Wojciech Kosc in Warsaw November 2, 2020

In the ninth straight day of street protests, hundreds of thousands of Polish women and men marched across Warsaw, other cities, and even small towns, demanding – in no diplomatic language - liberalisation of the abortion law.

The rallies – which the organiser, the Polish Women’s Strike (OSK), says are far from over — are the reaction to the ruling of the government controlled Constitutional Tribunal, which further restricted Polish women’s right to have an abortion.

The tribunal ruled on October 22 that terminating pregnancy because of fetal abnormalities – even in severe cases like the Edwards syndrome – is against the Polish constitution. That practically eliminated the legality of abortion in Poland, as terminations due to the fetus’s defects made up well over 90% of just over 1,100 legal abortions performed in the country last year.

Women’s rights organisations emphasise that the ban will not work. The already stringent regulation never deterred Polish women from having an abortion if that is what they want, activists say.

The real number of abortions is in the range of more than 100,000 every year. Terminations are carried out abroad or – in the case of poorer women – in substandard conditions in Poland, according to data gathered by the Federation for Women and Family Planning, a women’s rights NGO.

Defying regulations banning large gatherings, introduced earlier this month to curb the rapid spread of the coronavirus (COVID-19) pandemic, the biggest rally to date rocked Warsaw on Friday night. The OSK and the Warsaw town hall estimated the demonstration at some 100,000.

There were incidents involving far-right thugs who attacked the rally but were quickly contained by the police.

The rally went on peacefully despite uncompromising anti-government rhetoric that the organisers blasted from loudspeakers in between songs such as Take the Power Back by Rage Against the Machine.

The people’s anger concentrated on Law and Justice (PiS), the leading party of Poland’s ruling coalition of the United Right. PiS’ leader, Jaroslaw Kaczynski, officially the deputy prime minister, is widely seen as Poland’s top decision-maker, responsible for pushing the tribunal to issue a verdict on the abortion issue.

On Friday night, the demonstration aimed to walk right up to Kaczynski’s house in the upmarket district of Zoliborz but was stopped by the huge police presence. There were no scuffles with the police as the demonstration simply ended – after a few hours of more sloganeering and music – upon meeting the police blockade.

“Fuck PiS” and “PiS fuck off” were the rally’s dominant chants and the frequent slogan, which hundreds, if not thousands, of protesters put on their homemade placards.

There was no shortage of witty ones, too.

“PiS think that genitalia is an Italian airline,” read one of them. “If altar boys could get pregnant, abortion would be a sacrament,” read another, a take on the role that Poland’s Catholic church has played by long pushing for further restriction of the right to abortion.

The red lightning bolt — the protests' symbol, which the government propaganda is trying to present as derived from the Nazis — was everywhere.

Kaczynski apparently assumed that the pandemic would deter people from taking to the streets in protest while the ruling would score him points with the hardline conservative part of the PiS’ electorate. It is the same part of the electorate that the Polish Episcopate has long encouraged to vote for PiS.

The OSK is not letting up. The organisation is planning more rallies this week, starting on Monday with a blockade of traffic in Warsaw and other cities.

The organisation demands that the government “peacefully resigns” by the end of the year. It also wants the government to backtrack from the tribunal’s ruling and earmark more money for health care, which is currently under stress from fighting the coronavirus pandemic

The PiS-led cabinet is yet to respond to the protests with anything that the protesters would be willing to consider. A proposition by President Andrzej Duda to ban abortion when the fetus has a Down’s syndrome while allowing it in cases of more damaging abnormalities has been derided, from opposite standpoints, both by the OSK and the Catholic church

As the number of coronavirus cases keeps rising – there were nearly 22,000 new cases on October 29 and 30 – the government could impose tighter restrictions on people’s movement that could also stop people from protesting. That is not a given, however, as people ignored anti-COVID-19 measures on Friday and earlier.

The government could also influence the publication of the tribunal’s ruling in Poland’s official journal, the last formality needed for the ruling to become law. Some PiS-leaning media have speculated that the ruling would be published on November 2.

Meanwhile, the government’s poor handling of the pandemic and the countrywide outrage over the restriction of the right to abortion is having an impact on the polls.

In two out of four polls carried out during the protests, PiS slipped below the 30% line, the first such decline in six years. Polish media have been reporting on the unrest in the PiS camp, taken by surprise by Kaczynski’s ineptitude in meeting the challenges of the pandemic and the decision to incite protests over the abortion ban.

First official results from Bosnian elections put nationalists ahead after exit polls predicted losses
11 hours ago
Georgian MPs want to rid the country of oligarchs, but not all of them
11 hours ago
Hungary agrees on deferred payments with Gazprom for winter gas deliveries
11 hours ago
US sanctions Russia’s CBR head Nabiullina and other officials
11 hours ago
Russia prepares for new attacks against Ukraine from Belarusian territory
12 hours ago