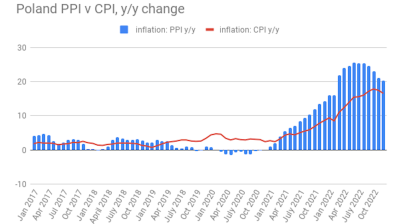 The index eased growth for a fourth consecutive time in December, affirming the outlook for inflation becoming less rampant, even if only very gradually. Still, the PPI expansion in December came in at 0.9pp above the consensus line.

“The data fit the picture of weakening inflationary pressure in commodity prices on international markets,” Bank Millenium said in a comment.

Still, PPI and CPI inflation are expected to remain elevated in 2023, leaving no room for interest rate cuts despite the already weak demand in the domestic economy. The central bank’s reference interest rate has remained at 6.75% since September.

Poland's December CPI eased to 16.6% y/y, easing 0.9pp versus annual growth in November. Inflation returning to around 20% y/y is expected in January and possibly in February – on the back of returning higher VAT rates on some goods - after which a more sustained but incremental easing of the inflation rate is the current consensus.

Prices in the most weighted manufacturing segment grew 15.3% y/y in December, after expanding a revised 16.2% y/y the preceding month, the breakdown of the data showed.

Mining and quarrying prices also picked up growth to 23.2% y/y in December after a gain of 21.6% y/y in November.

Electricity, gas and utility prices skyrocketed 66.8% on the year in December but still slowed down – albeit slightly – from a revised expansion of 67.3% y/y the preceding month.

The water supply segment saw prices expand 4.7% y/y in the twelfth month, a reduction in growth rate versus a revised increase of 5% y/y in November.

In monthly terms, the PPI added 0.5% in December after a revised fall of 0.3% month on month in November, GUS data also showed.