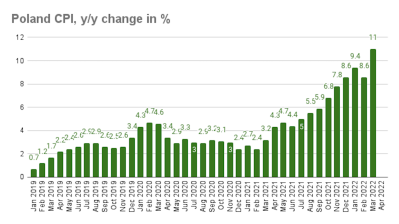 Polish CPI grew 11% y/y in March, the annual growth rate adding as much as 1.5pp to the February reading, statistical office GUS said on April 15.

Inflation returned with renewed strength in March, meeting expectations that the war in Ukraine would drive price growth further, particularly via boosting costs of energy and fuels. CPI is forecast to keep climbing up until a peak in June-July, after which it could possibly ease in line with faltering demand.

“We estimate inflation to come in at 10.4% in 2022 overall,” the state-controlled bank PKO BP said in a comment.

The March reading affirms the outlook for further tightening of the National Bank of Poland’s (NBP’s) monetary policy. The NBP hiked its reference rate by a surprising 100bp top 4.5% in March but is expected now to return to a 50bp increase rate.

Analysts say that the current tightening cycle will only stop at 7.5% in 2023.

Prices in the housing and energy segment jumped 17.7% y/y in March, including massive increases of 61.3% y/y for heating fuels and 49.2% y/y for gas, GUS showed in the breakdown of the data.

Russia’s industrial output decline slows to only 0.1% in August
10 hours ago
Putin's popularity remains high, but even after a hit in September it is still at 77%
11 hours ago
Russia on track to have a record-smashing grain harvest
2 days ago
Bosnia posts annual CPI inflation of 16.8% y/y in August
2 days ago
IMF sees Romania’s economy growing by 4.8% in 2022, analysts are even more bullish
3 days ago