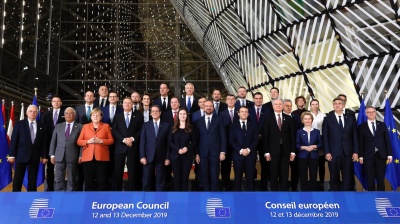 The European Union member states agreed in the early hours of December 13 the bloc will strive to reach climate neutrality in 2050. Poland was the only country not to sign up for the goal and the discussion on how to get Warsaw on board will resume in June.

“One member state, at this stage, cannot commit to implementing this objective as far as it is concerned, and the European Council will come back to this in June 2020,” the Council said in reference to Poland.

Climate neutrality is a key element of the European Green Deal, a major new policy initiative by the new European Commission headed by Ursula von der Leyen. It assumes nothing short of an overhaul of the bloc’s entire economy in line with the principles of climate protection.

Emissions of carbon dioxide and other greenhouse gases have already led to warming of the earth by 1°C relative to the pre-industrial era. The Paris Agreement assumes temperature growth is kept at the relatively safe level of 1.5°C-2°C by 2100 although, globally, current climate policies point to a warming of at least 3°C. That would be catastrophic, climate science says.

Poland has long objected to committing to the 2050 climate neutrality ambition, saying its starting point would put it at an economic disadvantage against other member states. Poland’s economy remains one of the most emissions-intensive in the EU with close to 80% of electricity derived from polluting hard and lignite coal.

“Poland has been exempted from the principle of applying climate neutrality policy. We will reach it at our own pace,” Polish Prime Minister Mateusz Morawiecki tweeted last night.

“The process of achieving climate neutrality will be supported by a fund of €100bn. A fair share of this fund will be allocated to Poland for just transition,” Morawiecki added.

The so-called Just Transition Fund was another contentious element of the negotiations. It will be set up to ease the process of energy transformation in countries like Poland, where there still are entire regions whose economies depend on coal extraction and burning.

The EU will try to get Poland formally on board for the climate neutrality goal during another summit in June 2020. But the Polish “exemption” does not impede the bloc’s climate efforts, von der Leyen and the European Council President Charles Michel told reporters after they wrapped up a night of tough talks.

The Commission will now begin drafting legislation to put the European Green Deal in place. One of the first major decisions will be upping the EU’s greenhouse gases emission reduction target for 2030 from 40% to 50%-55%, relative to 1990. That is coming in mid-2020.

“Some member states have indicated that they use nuclear energy as part of their national energy mix,” the text of the conclusions said.

The discussion about the role of nuclear energy in EU’s climate policy is one of several heated debates regarding the pathway to climate neutrality. A number of countries with nuclear power capacity are at odds with the anti-nuclear coalition led by Germany, which is in the process of decommissioning its entire nuclear power fleet despite warnings it will set back climate efforts.