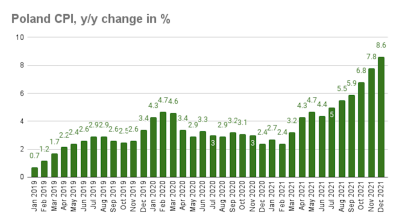 A 21-year high reading confirms the flash estimate, which GUS published at the end of December. Surging consumer prices have already pushed the National Bank of Poland (NBP) to raise interest rates four times in October-January from 0.1% to 2.25%.

With inflation expected to climb further to 9% y/y – 10% y/y in January-February, at least one more increase is virtually certain in the first half of the year.

The government’s anti-inflation measures, which kick in next month, will ease inflation growth to an extent but only temporary, effectively pushing peak price growth to around August. That will likely necessitate another intervention by the central bank so that interest rates climb to at least 3%.

Prices of food and non-alcoholic drinks drove CPI’s growth in December, the breakdown of the data shows. Food prices increased 8.6% y/y in the twelfth month, compared to a growth of 6.4% y/y in November.

Housing and energy prices added 11.2% y/y in December versus 10.7% y/y the preceding month.

The price of fuel grew 32.9% y/y in December, easing 3.7pp versus November. Transport prices – of which fuels are a part – grew 22.7% y/y overall, slowing down 1.4pp compared to the preceding month. The slowdown was an effect of cuts in excise duty, introduced by the government as a part of its "anti-inflation shield."