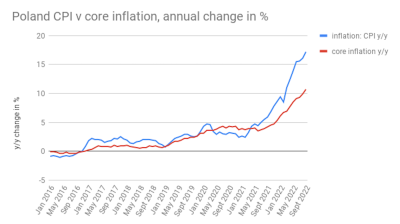 Core inflation growth tracks the expansion of consumer prices (CPI), which also accelerated in September, coming in at 17.2%, a gain of 1.1pp versus the preceding month.

The government says inflation is due to Russia’s war against Ukraine and the high commodity and energy prices that the aggression caused.

The government also hopes to squeeze price growth to an extent by curbing energy prices for households, smaller companies, and vulnerable users like schools or hospitals.

It remains unclear what the next steps of the NBP will be after the central bank paused monetary tightening, leaving its reference interest rate at 6.75% in October.

But the Monetary Policy Council, the NBP’s rate-setting body, is in internal conflict over policy, with three of the rate-setters going public recently criticising Glapinski and his backers in the council for not being serious enough about tackling inflation.

The central bank raised its reference interest rate 11 times in as 12 months between October and September from an all-time low of 0.1% to 6.75%.

The rate hikes were coming amidst the government’s expansive policy mix in the run-up to elections, due in the autumn of 2023. That is fuelling price growth, some analysts say.