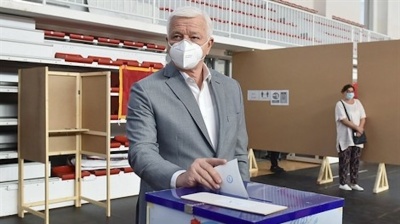 Montenegro’s Democratic Party of Socialists (DPS) will have a hard time forming a new majority in parliament and might have to step down after three decades in power after a slump in support in the August 30 general election, official results showed on August 31.

The DPS is leading after the vote, getting 35.06% of the votes, the state election body, DIK, announced after counting 100% of the votes. However, its main rival, the pro-Russian and pro-Serbian coalition For the Future of Montenegro, is a close second with 32.55%.

Both Peace is Our Nation and Black in White are more likely to ally themselves with For the Future of Montenegro.

The outcome is unprecedented in the recent history of Montenegro — pre and post independence — as the DPS and its leader President Milo Djukanovic have been in power for over 30 years and have never lost an election. A few hours after the exit polls, Djukanovic said that his party and its traditional partners would have 40 seats in the 81-seat parliament.

“The struggle to form a majority is going on," Djukanovic said at a press conference broadcasted by RTCG shortly after the polling stations were closed and exit polls were announced.

The official results confirm exit polls and show that the opposition would easily form a slim majority of 41 seats in the parliament, unless DPS manages to change the game in the forthcoming tough negotiations.

“Good afternoon, free Montenegro,” the pro-Russian Democratic Front, part of the For the Future of Montenegro coalition, wrote on Facebook after the official results were announced.

On social media, Montenegrins have commented that the Serbian Orthodox Church sealed the victory of the opposition, winning in a months-long conflict with the DPS on highly controversial church law.

The DPS’ popularity has suffered as a result of the months-long crisis provoked by the adoption of the controversial law on religions at the end of 2019, which has led to protests, rallies and escalating tensions with Serbia and the Serbs living in Montenegro.

The church law, according to its critics, may strip the Serbian Orthodox Church of hundreds of religious sites in Montenegro, including medieval monasteries and churches. This has led to numerous protests in Serbia and in Montenegro. In the latest escalation, on August 23, a convoy of Serbian Orthodox Church clerics headed from Belgrade to the Jabuka monastery on the border with Montenegro in protest against the law.

In the last few weeks, many Montenegrin citizens expressed their support for the Serbian Orthodox Church and their displeasure over the adoption of the Law on Freedom of Religion, as the authorities also banned liturgies and gatherings around shrines due to the coronavirus pandemic.

The ruling party has not yet commented on the official results, while the opposition is hailing its victory.

“In the yesterday’s election, the citizens of Montenegro have broken down the Berlin Wall with a pencil, and the state has been freed from crime and captivity by one family and a small circle of people around it,” daily Vijesti quoted the Black in White coalition as saying in a statement.

The coalition claims to be the key player in forming the next ruling majority.