Weak external trade demand, geopolitical uncertainties and impaired private balance sheets are projected to keep Turkey’s GDP growth at around 3% in 2020, well below potential growth which itself has weakened and which may decline further due to increased policy-related distortions in the economy, the Organisation for Economic Cooperation and Development (OECD) said in its latest economic outlook released on November 22.

“Investor confidence remains fragile and investment has declined sharply,” the OECD added in its note on Turkey.

It also said: “To rebuild domestic and international confidence, the macroeconomic policy framework should be simplified and made more transparent. Enhancing the transparency of the general government fiscal position, including the expanding quasi-fiscal channels, and ensuring the credibility of central bank independence would strengthen confidence. Further measures to enhance labour market flexibility and product market competition in the formal sector are needed to reverse the weakening of medium to long-term investment intensity and growth potential.”

Recovery in Turkey is under way, but uncertainties remain very high, the OECD said, adding: “On the back of the substantial minimum wage increase at the beginning of 2019, temporary indirect tax cuts, and credit expansion by public banks, private consumption has continued to recover. In contrast, business investment continued to decline in the first half of the year and high-frequency indicators herald no sizeable upturn. Non-financial firms continue to de-leverage their previously strongly increased foreign and domestic currency debts. The reported increase in bankruptcy protection applications suggests that financing constraints continue to undercut investment capacity.”

Turkey has seen its export market shares rise due to the competitiveness gains delivered by the sharp exchange rate depreciation triggered by last year’s Turkish balance of payments crisis, the OECD noted.

“Tourism exports benefited most, soaring by more than 15% in real terms in the first seven months of the year. Manufacturing export orders from the European market have contracted, but aggregate exports have remained positive. In contrast, employment has declined through 2019, despite considerable additional job creation in public and social services. Despite a strong pro-cyclical decline in labour force participation, the rate of unemployment excluding agriculture increased to 15% in the May-July period and the rate of youth unemployment to 25%,” the note said.

Warning that Turkey’s macroeconomic policy draws excessively on “opaque instruments”, the OECD stated: “Public banks have strongly supported private consumption by rescheduling households’ credit card and other debt, extending additional consumer loans, and offering subsidised housing and car credits. Consumer loans grew more rapidly than commercial credits, reaching the very high annualised rate of 25% in early October. At the same time, the exchange rate, which had depreciated by 33% against the US dollar after the August 2018 shock, and the country risk premium, which had risen severely, regained some ground.

“The lira exchange rate and the country risk premium nevertheless remain exposed to bouts of volatility arising from political and geopolitical uncertainties, which have risen recently. Against this backdrop, the high degree of dollarisation of domestic savings and credits further increases volatility risks for the Turkish Lira.”

Looking at how a new economic programme introduced in September intends to lift Turkish GDP growth sharply in 2020 (the government is targeting 5%) and 2021, the OECD noted the pressure on public banks to lend more.

It said: “As private consumption is hindered by high unemployment and low household confidence, and as private banks (which face higher loan delinquencies and are undergoing large-scale loan restructurings) remain prudent, public banks and other government financial institutions are being solicited on an ever-larger scale.

“Public banks are also reported to be undertaking foreign exchange operations to help stabilise the exchange rate, within the scope provided by regulations. Together with additional subsidies and incentives to selected businesses and projects, capital formation is being stimulated largely through policy leverage. This shift may raise important risks for the quality and sustainability of capital formation in the business sector, including in activities exposed to large capital misallocation risks such as energy and real estate development. This may compound the observed past decline in productivity growth and the potential growth rate, with short-term stimulus gains risk being more than offset by durable losses in trend growth.

“The expansion of government-controlled and subsidised funding is also not included in formal fiscal reports or in official fiscal plans, nor are most other off-budget liabilities such as expanding government guarantees to public-private partnerships. Even though detailed data are lacking, it is clear that public contingent liabilities have increased massively over the past year.”

Turkey’s monetary policy has benefitted from the very benign global monetary conditions with the policy interest rate sharply cut from 24% in July to 14% in October, the note said, adding: “At 8.6% in October, the annual inflation rate remains, however, well above the 5% target and is subject to upward risks in the period ahead as a result of sharp administrative price increases. A tight monetary stance should be maintained to ensure the continuation of the disinflation process. Ensuring the independence of the central bank is key for future credibility.”

The recovery in Turkey will be gradual and is vulnerable to substantial risks, the OECD concluded.

“GDP growth is expected to remain steady at around 3% in 2020 and 2021. Private consumption is projected to recover but investments should improve only very gradually. Weak export demand and impaired private balance sheets will continue to weigh on the recovery. Additional risks arise from geopolitical uncertainties, which, if not appeased, may erode confidence and increase volatility. In contrast, credible policy improvements in fiscal, financial and monetary policy areas may accelerate the recovery by upholding domestic and international investor commitment,” it said. 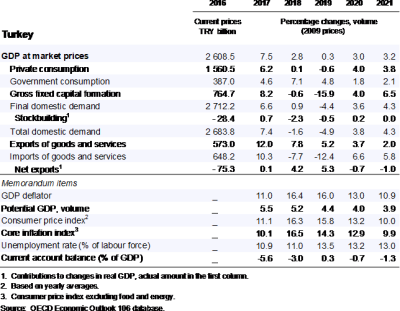