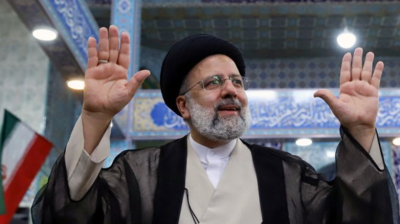 As millions of politically moderate Iranians on June 19 came to terms with how a “sham election” has made religious hardliner Ebrahim Raisi president-elect, attention turned to whether the regime will continue with the willingness shown by incumbent moderate President Hassan Rouhani to formulate an agreement with the US to revive the 2015 nuclear deal.

The gloom that has descended on Iranians who in vain cried foul when a vetting body removed prominent moderates from the June 18 poll—thereby paving the way for an easy Raisi victory and creating an Iran in which all the main centres of power are now under the control of the hardliners—may be broken to a certain extent if, post-election, Supreme Leader Ali Khamenei permits the government to come to an arrangement with the US to relaunch the nuclear deal, otherwise known as the JCPOA. And the omens don’t look too bad.

Iran’s conservatives clearly didn’t want to give the reformists a boost by allowing the ongoing Vienna talks to restore the JCPOA to successfully conclude before the election, but now that Raisi has delivered the presidency, the talks may soon pick up pace. Iranian officials insisted throughout the election campaign that despite the conservatives’ deep suspicions of the West—reinforced in May 2018 when then US president Donald Trump unilaterally pulled the US out of the multilateral JCPOA—there was an internal consensus subscribed to by both the moderates and the hardliners that a restoration of the nuclear deal is desirable.

Shot in the arm

In return for restoring compliance with the JCPOA, Iran will have to return to comprehensive and verifiable inspections of its nuclear development programme designed to enable a UN watchdog to ensure that its work remains entirely civilian in nature, but the prize would be a lifting of heavy US sanctions, including on oil exports, that would give Iran a big economic shot in the arm. And Raisi, who will be inaugurated in 45 days, badly needs a win with the millions of disillusioned Iranians who stayed away from the polling stations to the point that turnout on election day fell to an all-time low. The record low was given by officials as 48.8% (compared to the 73% turnout at the last presidential election in 2017), though there were immediately speculative debates on social media that the percentage of those who voted must have been lower given anecdotal evidence of empty polling stations.

Iran’s foreign minister, Mohammad Javad Zarif, has, meanwhile, been suggesting in recent days that the JCPOA could be salvaged even before the end of Rouhani’s administration.

“Negotiations on the JCPOA are under way [in Vienna]. There is a good chance that an agreement will be made before the end of our administration. We will leave office in mid-August and I think that it is highly likely that we will be able to reach an agreement long before this date,” Zarif said in an interview on the sidelines of the Antalya Diplomacy Forum in Turkey on June 19, Iran’s Fars News Agency reported.

Sixty-year-old Raisi, who wears a black turban identifying him in Shia tradition as a descendant of the Prophet Muhammad and who was 19 years-old at the time of the 1979 Islamic Revolution that brought down the Last Shah, said in a victory statement that he will form a “hard-working, anti-corruption and revolutionary” cabinet. He added that he would be president for all those who voted for him, for those who didn’t and for those who didn’t vote at all.

Asked about the disqualifications of candidates, Zarif said: “Many of us were surprised and disappointed but at the end of the day Ebrahim Raisi is the president of all Iranians.”

Speaking to CNN on the eve of the election, Sanam Vakil, deputy director at the Middle East programme at the London thinktank Chatham House, said: “Western policy makers have long hoped and tried to nurture the reform or transformation of the Islamic Republic hoping that, through elections, moderation or reform would come from within. This election… and the selection of Ebrahim Raisi really closes the door on any hope of reform and that’s going to be a real challenge for the international community and for the Biden administration.

“Iran’s population is young and their hopes for the future are being dashed without economic opportunity so it is going to fall to the Raisi government to try and forge a new path and try and rebuild some bonds with the people. It is unclear to me how that is necessarily going to happen because a lot of his policies remain rather vague and undefined and, of course, the political system has become significantly more repressive, and relying on coercive power to maintain authority is always dangerous.”