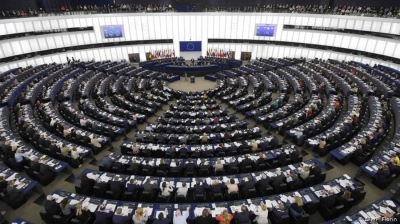 At least nine European Union countries and the bloc’s executive arm have called for new sanctions on Belarus following a brutal police crackdown on peaceful demonstrations
By bne IntelliNews August 14, 2020

At least nine European Union countries and the bloc’s executive arm have called for new sanctions on Belarus following a brutal police crackdown on peaceful demonstrations that followed the presidential election on August 9, Reuters reports.

The EU held emergence talks on August 14 to determine how the block should respond to four days of fighting across the country. Incumbent Lukashenko claimed he had won just over 80% of the vote in an election that is widely seen as massively falsified. The majority of the people of Belarus believe former English teacher Svetlana Tikhanovskaya won in a landslide victory, taking 60%-70% according to the few polls where the tally was not falsified.

Protests immediately broke out following the release of the results on August 10 and the country has been ravaged by unrest ever since. As bne IntelliNews reported, workers at many of the country’s leading companies came out on general strike on August 13. So far two people have died and 6,700 have been detained, although prisoners were being released on August 14.

The EU is struggling to respond and has never developed a detailed strategy for Belarus beyond inclusion in its Eastern Partnership network that has sent some economic development aid to the country.

Relations have warmed between Brussels and Minsk in recent years as the West has sought to drive a wedge between Lukashenko and Russian President Vladimir Putin as relations between Moscow and Minsk soured.

But the scale and brutality of the violence perpetrated on the population are demanding a response from the EU, which is cautious, as MEPs are reluctant to drive Lukashenko into Russia’s arms.

No definitive decision on imposing sanctions on Belarus was reached at the meeting, which has been billed as a preliminary discussion. A final decision will be made later this month.

The meeting agreed on the most obvious measure: to reapply targeted sanctions against individuals in Lukashenko’s administration.

Poland, the Czech Republic, Estonia, Latvia, Lithuania and Denmark called in a joint letter for “restrictive measures against officials” responsible for the election result and for beatings of protesters by security forces.

“We would need to find a careful balance between pressure against and engagement with Belarus President Lukashenko. We believe the EU should assume the role of a mediator as soon as possible,” said the letter, seen by Reuters.

Germany, Austria and Sweden have already called for sanctions straight away.

Diplomatic sources said the main sceptic was Hungary, which has previously called for all EU sanctions on Minsk to be lifted.

The head of the EU’s executive arm, Ursula von der Leyen, tweeted: “We need additional sanctions against those who violated democratic values or abused human rights in Belarus. I am confident today’s ... discussion will demonstrate our strong support for the rights of the people in Belarus to fundamental freedoms and democracy.”

The bloc first imposed sanctions on Belarus in 2004. It stepped them up in 2011 over abuses of human rights and democratic standards, including vote rigging following an election in 2010.

Many sanctions were lifted after Lukashenko released political prisoners in 2016. But an arms embargo remains, as do sanctions on four people over the unresolved disappearances of two opposition politicians, a businessman and a journalist in the 1990s. Lukashenko has been accused of running death squads and those that disappeared are assumed to have been murdered.