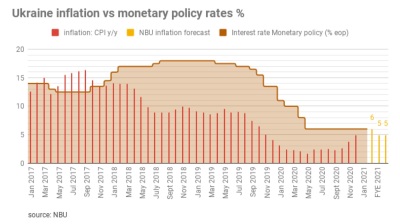 The National Bank of Ukraine (NBU) has declared that it agreed not to adjust its main policy rate at its monetary policy board meeting on January 21, holding it at 6%. Since June, the policy has remained unchanged. The strategy of the central bank would be to seek to strike a balance between reacting to inflation threats and promoting economic regeneration, the NBU stated.

Market inflation rose to 5.0% YTD in 2020, in the centre of the 4%-6% NBU inflation goal range. Accelerating inflation was attributed to the competitive regeneration of the global economy, the rise in domestic market demand, as well as increasing oil resource prices and certain food goods.

The NBU has updated its market inflation outlook to 7.0% from 6.5% YTD in 2021. Inflation is forecast to increase at 1H21 due to strong market demand, higher oil resource costs and a lower 2020 harvest. In addition, the rise in administratively controlled rates will stay strong due to higher excise duty on alcohol and tobacco and higher oil resource prices.

The upward inflation trend will then cease as inflationary pressures weaken. The availability of agricultural goods will improve with a new crop and the impact of a low comparative base will be decreased by the end of the year. The central bank expects consumer inflation to rebound to its goal level of 1H22. It will stick near its mid-term goal of 5% in 2022-2023.

Ukraine's GDP fell by 4.4% year on year in 2020 compared with 6.0% y/y in its October forecast, according to NBU forecasts. The rapid revival of the economy at 2H20 was primarily attributed to a rise in domestic demand. In the meantime, investment activity stayed low. The NBU expects Ukraine's economy to develop by 4.2% a year in 2021. In 2022-2023, it will rise by about 4% per year, powered largely by high demand for consumption, fuelled by rising public income.

The IMF's collaboration is a primary expectation of the central bank's forecast. Support from the IMF and other foreign donors is vital to the implementation of projected budget spending in 2021. The main challenges to the macroeconomic outlook include the reinforcement of quarantine restrictions both in Ukraine and internationally, as well as the large inflow of foreign money, which may alleviate inflationary pressure across the exchange rate route.

The NBU announced that it is ready to increase the main policy rate in order to get inflation down to its target level.

Kazakhstan manufacturing PMI posted 48.5 in February, as the rate of decline eased thanks to an increase in new orders.

The index’s expansion strengthens the outlook for recovery in Poland’s manufacturing sector in 2021.

Serbia had one of the smallest GDP contractions across the emerging Europe region in 2020.

Fourth quarter slowdown was significantly lower than during the first wave of the pandemic, despite worse epidemiological data.

The headline seasonally adjusted IHS Markit Russia Manufacturing PMI put in its strongest growth since April 2019 after registering 51.5 in February, up from 50.9 in January, signalling a marginal improvement in the health of Russian manufacturing.