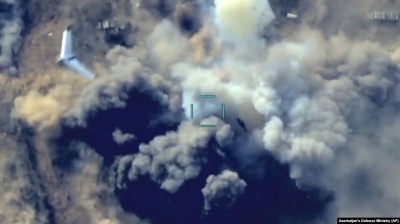 In this still taken from video released by Azerbaijan's Defence Ministry prior to the ceasefire, a drone flies over a site where Azerbaijan's forces are allegedly attacking Armenian military positions.
By bne IntelIiNews October 11, 2020

Azerbaijan’s Foreign Minister Jeyhun Bayramov said on October 10 that a humanitarian ceasefire over Nagorno-Karabakh that he had just signed with his Armenian counterpart after Moscow talks would only last for as long as it took the Red Cross to arrange the exchange of the dead—and within minutes of it taking effect at midday local time each side was accusing the other of shelling.

Matters worsened on October 11 when Azerbaijan accused Armenia of shelling a residential district in its second largest city Ganja in the early morning hours. The Azerbaijani Prosecutor-General's Office said an apartment was hit and nine people were killed, including four women, and 34 were wounded in the attack. Armenia's Defence Ministry called the claim "an absolute lie" and accused Azerbaijan of shelling parts of the Nagorno-Karabakh enclave, including the self-declared republic’s largest city, Stepanakert.

Baku also accused Armenia of attempting an unsuccessful rocket or drone attack on its Mingchevi hydroelectric station and of shelling villages in the Aghdam, Terter, Aghjabedi and Fizuli regions of Azerbaijan, all of which Yerevan denied. Later in the day, Azerbaijan said it launched air strikes on an ethnic Armenian regiment. A spokesman for the leader of Nagorno-Karabakh told Reuters he did not have information about the alleged attack.

Prior to the claimed attack, Azerbaijani President Ilham Aliyev said on Twitter: “The Armenian side aims to recapture the liberated territories. Armenia’s political-military leadership bears a responsibility for perpetrated crimes. The Azerbaijani side will give a befitting retaliation!”

Despite the claims and counter-claims, Arayik Haratyunyan, leader of the ethnic Armenian forces in Nagorno-Karabakh—still internationally recognised as part of Azerbaijan—said the Russia-brokered ceasefire was holding but that the situation remained tense.

He added that the process of exchanging prisoners under the ceasefire was expected to begin on October 11, but that it was in doubt. Nagorno-Karabakh's foreign ministry said on October 10 that the only way for lasting peace was for the international community to recognise it as an independent republic.

Russian Foreign Minister Sergei Lavrov spoke with his counterparts from Armenia and Azerbaijan and they reiterated their commitment to the ceasefire, the foreign ministry in Moscow said in a statement on the evening of October 10. The countries had agreed to start “substantive negotiations” to resolve the longrunning territorial clash, the ministry said in a statement earlier in the day after the more than 10 hours of talks that led to the agreeing of the temporary ceasefire.

Prior to the ceasefire talks in Moscow, Aliyev said that he was giving Armenia a "last chance" to resolve the conflict peacefully. "The conflict is now being settled by military means and political means will come next," he warned, saying that nearly three decades of international talks "haven't yielded an inch of progress, we haven't been given back an inch of the occupied lands."

Aliyev also admitted that F-16 fighter jets seen in satellite images taken of Ganja airport and published by various media outlets were Turkish, but said that they were simply still stationed there following recent military exercises and were playing no part in the conflict. Armenian news outlet Hetq reported Armenian Ministry of Defence representative Artsrun Hovhannisyan as writing on his Facebook page that Turkish F-16s, operating in Turkish airspace, were directing Turkish-made drones being used by Azerbaijan to target civilians in Nagorno-Karabakh. "Drones, under the cover of six F-16s, that is, escorts, are striking the civilian population and infrastructure of Artsakh [Nagorno-Karabakh," he reportedly wrote.

Turkey and Azerbaijan have denied that Turkish military advisers, Syrian mercenary militiamen, fighter jets and armed drones have been provided to Baku to assist in the fight for Nagorno-Karabakh. The mercenaries have raised concerns in Moscow and Tehran, with both Russia and Iran wary of Nagorno-Karabakh becoming a hotbed of terrorists.

On October 9, Armenian President Armen Sarkissian said Nato member Turkey’s role in the conflict should be investigated by Nato. The previous day, Armenian Prime Minister said in an interview with Der Spiegel that Turkey wants to create a corridor through Armenian territory, adding: “And we see that the Azerbaijani statehood is being absorbed by Turkey. Azerbaijan has no longer control of its destiny; Turkey is now the decision-maker in Azerbaijani.”

The Turkish Foreign Ministry reiterated Turkey’s full support for Azerbaijan in an October 10 statement, adding: “While the humanitarian truce for the exchange of hostages and bodies of those killed is an important first step, it won’t be the lasting solution,”

EU foreign policy chief Josep Borrell urged the sides to abide by the ceasefire agreement. He called on "all actors, including external parties, to refrain from any actions that may lead to further casualties".

"In this respect, we note with extreme concern the reports of continued military activities, including against civilian targets, as well as civilian casualties and urge the sides to ensure full respect of the agreement on the ground," Borrell said in a statement.

Armenia's foreign minister was due in Moscow on October 12 for talks with officials from the Minsk Group of the Organization for Security and Cooperation in Europe (OSCE) which is co-chaired by France, Russia and the US and has been trying to resolve the question of Nagorno-Karabakh for nearly 30 years.

Hundreds of soldiers and an unknown number of civilians have been killed since hostilities broke out on September 27.

Also at the weekend, Azerbaijan said once more it wants a change in the Minsk Group talks’ format. It has spoken of wanting to get Turkey involved, while on October 10 it accused France, home to a sizable Armenian diaspora community, of not being a neutral mediator.

Dmitri Trenin, director of the Carnegie Moscow Center and a former colonel in the Russian army, said on Twitter any peace talks were likely to fail and that Azerbaijan would continue to press for Armenian forces to leave the enclave, something Armenia would not accept.

Russia could not afford to step back, he said. “For Russia, the most important issues in the South Caucasus are the security of Russian borders from jihadis coming from the Middle East and elsewhere, and Turkey’s rising role in the region,” wrote Trenin. “This means that Moscow can’t walk away from the Nagorno-Karabakh conflict and allow a war to rage”.

In New York, Armenian-Americans led a rally in support of Armenia that stopped traffic on the Brooklyn Bridge on the night of October 10. On October 9, there was a rally for Armenia in front of the White House.

Kim Kardashian West, meanwhile, has said she is donating $1m to the Armenia Fund to help people caught up in the fighting.