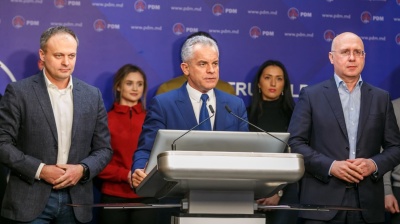 Results so far from Moldova’s February 24 general election show the pro-Russian Socialist Party and the Democratic Party (PDM) could end up with roughly the same amount of seats in the new parliament, meaning neither would be able to form a majority.

This is the first time the new electoral system, which introduces mixed proportional-majority voting, has been used.

With 90% of the votes counted, the results showed President Igor Dodon’s Socialists (PSRM) leads in terms of the proportional vote with some 32% of the votes, followed by the pro-EU bloc ACUM of Maia Sandu and Andrei Nastase, and the Democratic Party (PDM) of Vlad Plahotniuc each with around 25% of the votes. But PDM leads when it comes to the 50% of MPs elected by majority vote. Turnout was modest at only 49%.

Speaking after the vote, Plahotniuc said the party was willing to meet with all those represented in the new parliament. "We in the Democratic Party have no politicians with whom we do not accept to discuss, we have no subjects that we do not want to discuss, we will not put conditions, but we will not accept any conditionality. We want to work for the country and do everything we have in our meetings with people,” Plahotniuc told a press conference after polls closed.

Although the PDM and PSRM are suspected of hidden agreements, the PDM cannot join the PSRM in a majority coalition without major loss of credibility: the declared pro-EU government of Prime Minister Pavel Filip has gained credibility recently, as it is seen as efficient and not necessarily responsible for the dysfunctional judiciary, as well as managing to keep the agreement with the International Monetary Fund on track.

ACUM has said it will not support either of the two, but in principle it could form a majority with one of them.

There is a small number of independent MPs or MPs from smaller parties (such as the party of Balti mayor Ilan Shor) elected under majority vote, but not enough either of the major parties to work with them to form a majority. Nonetheless, their positioning will be important for the balance in Moldova’s parliament after elections, a balance that looks at this moment unstable and prone to political turmoil, possibly leading to early elections.