MINSK BLOG: What will (not) change in the Belarusian economy after the elections

Nobody in Belarus or outside the country has any doubts that Alexander Lukashenko will be re-elected for a fifth consecutive term in the presidential elections on October 11. But what does this mean for Belarus’s economy and business sector? The country will continue to rely on Russian financial support instead of privatisation, and much-needed reform of state-owned giants will be further delayed. At the same time, some uncertainty still exists.

Taras Nadolny, the first deputy governor of the National Bank of Belarus (NBB), told reporters on September 25 that the government was ready to publish a five-year 'road map' of structural reforms in mid-October. This statement triggered speculation among Minsk-based experts that the authorities, seeking new financial support from foreign donors, really are serious about reform this time, but are trying to avoid unsettling the public by waiting until after the polls to unveil their future economic measures.

Earlier this year, the Belarusian government submitted this road map to the International Monetary Fund (IMF), with which the country is currently negotiating a new $3.5bn loan, and to the World Bank. It seems likely that the same document was sent to another potential donor, the Russia-led Eurasian Fund for Stabilisation and Development (EFSD).

However, on September 26, Lukashenko tempered the expectations of those waiting for bold economic reforms in Belarus. During a meeting with IMF managing director Christine Lagarde in New York, the Belarusian president "expressed hope that the new [support] programme will use a balanced approach to take into account the interests of the country and its policy, ensuring a high level of social security for its people".

In other words, Belarus will not embark on unpopular reforms that can stoke social tensions and undermine Lukashenko's rating – even after he is ensconced for another five years in power.

"The current system of the Belarusian government is conservative. You cannot expect a man who became president in 1994 with ultra-conservative views on politics and the economy to initiate reforms after 21 years [in power]," Oleg Andreyev, managing director of investment banking at Minsk-based consulting company EnterInvest, told bne intelliNews.

Andreyev believes "total privatisation" will not happen in Belarus "in the current environment, given that the core of the current government will remain", since it does not fit into the system of values of the country's top officials.

The expert adds that the government's tried-and-tested practice of setting unreasonable prices for assets that potentially could be sold, alongside social and practical conditions that make projects unprofitable and inefficient, is "nothing more than the artificial creation of obstacles" to privatisation.

Mel Rogers, vice chairman and CEO in Belarus of the British-Belarus Chamber of Commerce, shares this pessimistic mood. "There will be a similar resistance to [privatisation]. It will be on the agenda but at an inflated price too high to be of interest," he tells bne IntelliNews.

Indeed, Russian credit resources, alongside gas and oil subsidiaries, have supported the Belarusian economy for many years. In particular, a $3bn loan from the Russia-led EFSD rescued the country from a balance-of-payment crisis in 2011, when the domestic currency lost two thirds of its value and inflation reached 108.7%.

Andreyev believes that the policy of refusing privatisation in favour of obtaining new credit resources, primarily from Russia, has proved its viability. “However, it is not only Russia that provides financial support to Belarus, but also the IMF and China," the expert adds, pointing out that a key element of this policy is the country's geopolitical potential as a "buffer zone" between the West and the East, a situation that the country's government exploits effectively.

Today, Belarus is in negotiations over a new loan from the EFSD. The country is aiming to secure a similar amount as from the IMF - around $3bn - with the aim of stabilising the state finances. 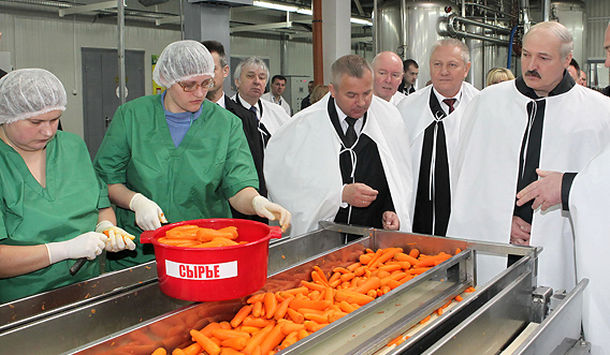 The country passed a peak in its foreign state debt repayments in 2014-2015, when it needed more than $3bn each year. In 2016, the government is due to allocate just $1.6bn for the servicing of its foreign debt. However, according to Alexander Mukha, a Minsk-based independent financial analyst, the central bank currently has $4.6bn in international reserves but owes up to $2.7bn to local commercial banks, and this situation poses a threat to the government's coffers.

Despite the lack of a desire on Lukashenko’s part to reform the traditional state-owned industrial giants in the past, some experts believe that changes in this approach are possible. "I believe that state support for [state-owned] enterprises will be reduced. The number of their employees will decrease, which, generally, is already happening now," Mukha says.

Andreyev also confirms that, despite Lukashenko denying the possibility of mass layoffs at Belarusian state-owned industrial giants, which have been badly hit by weakening demand in neighbouring Russia over the past year, significant downsizing is under way at many of them. "Some creeping changes are already happening," Andreyev says.

However, Rogers of the British-Belarus Chamber of Commerce believes more radical reform of Belarus’s state-owned industrial majors, including mass downsizing, is unlikely to happen. "It would need a long-term plan to overcome the current deficiencies in the large state-owned organisations, and with this long-term plan comes redundancies. Large numbers of unemployed people causes unrest so is difficult to implement this in the economic model where 'full employment' is a political desire," he says.

Foreign business also wants to see reforms on the ground. "It needs clear taxation laws, confidence in the repatriation of profits, much less government intervention and bureaucracy in Belarus... I guess, there also needs to be more development of private enterprises to support foreign investment by way of excellent sub-contract services,” Rogers underlines.