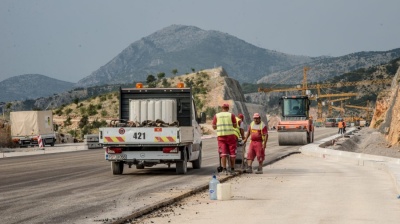 Montenegro’s previous government borrowed significantly more for the construction of the first priority stretch of the Bar-Boljare motorway than the project should have cost, according to two feasibility studies published by the capital investment ministry.

The motorway was a key project for the previous two governments led by President Milo Djukanovic’s Democratic Party of Socialists (DPS) that ran the country for over three decades before losing power in 2020.

The construction works are being carried out by China’s CRBS and co-financed by a $944mn loan and state funds. The project led to a significant increase of Montenegro’s foreign debt, which in 2020 reached 103% of GDP. Struggling with the debt burden, Podgorica appealed to the EU for help earlier this year.

While the DPS-led government borrowed $944mn for the construction of the Smokovac-Matesevo stretch, the two feasibility studies carried out in 2009 and 2012 indicate it should have cost significantly less.

However, a feasibility study by URS Infrastructure and Environment, a UK engineering consultancy, showed that this stretch should cost $803mn, while a second study, carried out by the UK consultancy Scott Wilson Group, put the cost even lower at $570mn.

According to Capital Investments Minister Mladen Bojanic, so far the government has paid €724mn to investors for the basic part of the works and another €38mn for the additional works.

Construction of 44km Smokovac-Matesevo stretch was launched in April 2015. The 169-km Bar-Boljare road project is significant in comparison with the size of Montenegro's economy, carrying both benefits and risks. In the past few years, it has pushed up economic growth, but left Podgorica with few options to invest in other significant infrastructure projects.

Local anti-corruption NGO MANS has many times voiced concerns about the project, claiming it has created room for corruption and lacks transparency.

Meanwhile, on November 16, the primary court in Montenegro’s capital Podgorica ruled that CRBC must pay €200,000 for causing damage to fish in the UNESCO-protected Tara river while building the highway, public broadcaster RTCG reported.

In April 2018, local fishing clubs Tara and Moraca from the town of Kolasin filed a lawsuit against CRBC. The court ruled that the construction company used pipes to drain cement water and other dirt from the highway into three smaller basins located on the banks of the Tara Rive without any purification.

The current government of Prime Minister Zdravko Krivokapic also decided to sue CRBC over the devastation of Tara River. An investigation into the environmental damage caused by CRBC was launched in March.

CRBC is charged by the state with breaching the law, building a facility without measures for environmental protection and not in line with the adopted project for the construction, which has caused significant environmental damage across a significant area.

In 2019, UNESCO officials expressed concern over the construction of the motorway near the Tara river, saying that the riverbed in some locations had been reduced by 50 metres.

Montenegro’s then opposition URA party, as well as MANS also raised the alarm in 2019 about the devastation of the Tara.

Also, MANS has several times warned that CRBC was not building the motorway stretch with proper materials.

In June 2019, MANS filed a claim against then tourism minister Pavle Radulovic and former transport minister Osman Nurkovic over what it said was "environmental devastation" associated with the Smokovac-Matesevo construction.

MANS claimed that CRBC was depositing waste into the riverbed and on the banks of Tara river and, despite warnings, the government had not taken any steps to prevent that.

COMMENT: The new Cold War will be different, and not only because of China
INTERVIEW: Helen Rodwell, head of CMS’ corporate practice in CEE
Geopolitics overshadows Western Balkan nearshoring ambitions

Polish proposed ban on Russian rubber may give the European tyre industry a flat
5 hours ago
Prague to have a new municipal government after record-long negotiations
9 hours ago
Party congresses of Hungarian opposition demonstrate deep divisions
10 hours ago
At least 500 dead after huge earthquake hits Turkey, Syria in early hours
10 hours ago
Turkish minister tells US ambassador ‘Take your dirty hands off Turkey’ as sanctions sparks fly
15 hours ago