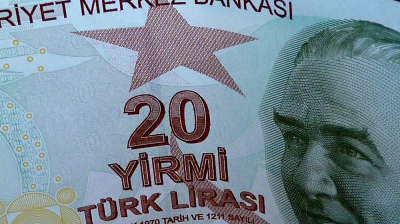 Will the lira escape the jaws of another currency crisis?
By bne IntelIiNews May 14, 2020

The markets continue to ask who might come through for Turkey with a hard currency swap line that could help arrest its slide towards a possible second Turkish lira crisis within two years.

Earlier this week, a former top US central banker said it would likely take a strong endorsement from US President Donald Trump for the Federal Reserve to extend a dollar swap line to Turkey that would help ease its cash crunch of depleted foreign reserves and high FX debt obligations. On May 14, however, news broke that the Erdogan administration is busy pursuing potential swap lines from alternatives to the US including Japan and the UK, while it is requesting that Qatar and China expand existing facilities. Reuters cited three senior Turkish officials as relaying the situation.

Cevdet Yilmaz, the ruling Justice and Development Party’s (AKP's) deputy chairman for foreign affairs confirmed on May 14 at a panel discussion that Turkey was seeking swap agreements. "We are having negotiations with different central banks for swap opportunities. It is not only the US, there are also other countries," he said.

Turkish President Recep Tayyip Erdogan has given short shrift to suggestions that he could go the International Monetary Fund (IMF) for a bailout. It would take a huge political U-turn for him to do so as throughout his 17 years as Turkey’s leader he has always said it would never happen on his watch. That remains the case even though many analysts have said that the Fund would be a good option for Ankara as things stand.

Reuters quoted one of the officials it spoke to as saying Turkey was feeling confident after the talks on swap lines. But it added that it was unclear how close the Turks might be to securing any deals as the coronavirus (COVID-19) pandemic was stretching governments and central banks like never before.

If Turkey fails to secure tens of billions of dollars worth of funding, it risks a currency spiral similar to August 2018, when the lira briefly shed half its value in a crisis that shook emerging markets. During that crisis the currency hit 7.23 to the dollar. Last week, it weakened as far as 7.27, a new all-time low. Turkish officials have since used various tactics to claw back some ground—including attempting to shut down offshore trading in the lira and ‘catch-all’ regulations—and by 01:00 Istanbul time on May 15 the rate stood at 6.92.

As the lira hit the skids last week, Turkish officials blocked three international banks—BNP Paribas, Citigroup and UBS—from FX trading. They then reversed the decision just days later, perhaps anxious that the markets saw their move as tantamount to using a sledgehammer to crack a nut.

“Turkey lifted the ban on 3 foreign banks from conducting deals in lira, but the damage has been done. Few trust RTErdogan. He has destroyed investor sentiment. The lira will continue to tank,” was the tweeted response to the episode from applied economist at Johns Hopkins University Steve Hanke. In a previous comment on Twitter, he said the Turkish president had “hit the panic button”.

True to form, the populist Erdogan has also blamed unnamed foreign market manipulators for Turkey’s latest lira woes. He said this week that the currency’s fall was caused by "those who think they can destroy our economy, put shackles on our feet, corner us by using financial institutions abroad".

The Turkish central bank's net foreign currency reserves have dropped to $26bn from $40bn this year, with bankers saying the national lender has burnt through dollars in its effort to use state bank interventions on FX markets to support the lira. The currency has nonetheless fallen 15% this year versus the dollar, adding to the 36% it lost across 2018 and 2019.

Turkey’s 12-month foreign debt obligations stand at $168bn. Around half are due by August. Vanishing tourism income, amid the coronavirus crisis, meanwhile, has blown up the country’s monthly current account deficit to almost $5bn.

Turkey has existing currency swap facilities worth $1.7bn with China and $5bn with Qatar.

A Japanese government official told Reuters that Tokyo has no plan for now beyond monitoring the lira, but added that the Group of Seven (G7) countries or the IMF would rescue Turkey "if it morphs into a real crisis".

"This feels like a rerun of the last lira crisis," Win Thin, global head of currency strategy at Brown Brothers Harriman was quoted as saying by the news service. "Surprisingly little has changed fundamentally in the nearly two years that have passed (except policies) that make it even harder to invest in Turkey."