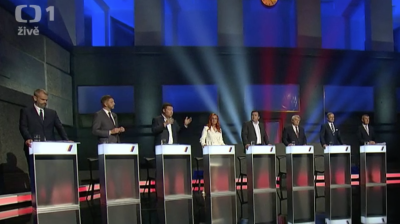 Not even half the leaders invited to a pre-election debate aired on Czech public television Ceska Televize on October 6 seem to have what it takes to become the next prime minister, said commentators after the "super-debate" of eight heads of political parties and coalitions running for the general election to be held over the next two days (October 8-9).

“Anyone who saw the super-debate will probably confirm that nothing was super about it, no one was super in it. It sounded like some old rhyme that annoys people and makes them switch off. If there is one thing this super-debate showed, it is how stuck, tiresome and roundabout Czech politics is,” said Aktualne.cz commentator Martin Fendrych.

“If someone had read a good book or watched an interesting film on Wednesday evening instead of watching the so-called super-debate on Czech Television, they would have done better. We learned nothing new from the politicians ...  It could have had no effect on the already convinced voters, while those undecided remained still undecided tens of hours before the important elections to the Chamber of Deputies,” added Viliam Buchert from Reflex.

The general election this weekend will be the most extensive test of how satisfied Czech citizens are with the performance of the current government and parliamentary parties, particularly in the past two years, which have been significantly affected by the coronavirus epidemic.

Voters were given one of the last chances to hear what candidates think of topics that had been addressed already several times in previous debates, such as anti-epidemic restrictions, vaccinations, inflation, taxes, the budget, the Green Deal, energy policy and the housing crisis.

Babis´ ANO is considered to be the main favourite for the next PM, his position being unlikely to be endangered by the recent findings in the Pandora Papers or the rising prices in the country. However, even if Babis managed to get the highest number of votes, he would have to look for partners to his government among those parties outside the two coalitions (SPOLU and PirateSTAN), which have already ruled out governing with him.

He would have to search for seats from the far-right SPD, which is around 10% in opinion polls, or his current coalition partner the Social Democrats – who surprisingly said during the debate that they might consider joining ANO in the government – the Communists, or Oath, all parties that are hovering around the 5% threshold necessary to qualify for the parliament.

Oath leader Robert Slachta, however, ruled out working with ANO, SPD or the CSSD during the debate, alleging their involvement in putting together a "tell-all" book about him that is apparently about to come out.

Far-right leader Tomio Okamura has also said he will not join a government with Babis, though he has provided his current cabinet with support at times in parliament.

Babis confirmed to several media that if his party did not win the parliamentary elections this weekend and if it were not possible to create the new government, he would leave politics. “I can't imagine being in the opposition seats. I'm not a politician who makes great speeches, I'm not a good orator and most importantly I wouldn't be able to do anything, I would not be able to change anything. Only a majority government can advocate relevant issues for citizens,” Babis said.

Nevertheless, Czech President Milos Zeman has already promised that he will give the chance to form a government cabinet to the chairman of the winning party – not coalition – which is likely to be Babis.

During the debate, Babis depicted himself as the continuity candidate, the vote for stability, and was much more measured than in the high-tempo TV Prima debate with just three other leaders and a live audience on Sunday.

The main news from the debate was that Babis announced another giveaway for voters. When addressing high prices of electricity during the Ceska Televize debate, Babis said the government is ready to temporarily cancel value-added tax (VAT) on energy to prevent the impact of rising electricity prices on households. "We are ready to reduce VAT on energy to zero," Babis stressed; he was supported by his coalition partner Hamacek.

"The price hikes are horrible and are the result of the government," responded Petr Fiala.

According to the analysts, however, the government cannot simply abolish VAT on energy, as Czechia would then face EU sanctions. The analysts pointed out that VAT is one of the so-called harmonised taxes in the EU, the rules of which are determined at EU level and changes require the agreement of all EU member states.

“This would bring significant shortfalls in tax collection which would mean significant disadvantages, compared to the current plan, that would compensate the most vulnerable households for rising energy prices. On the other hand, waiving VAT on energy would be a blanket measure, so it would certainly be appreciated by the middle class, which is significantly affected by high inflation. Previous compensation plans did not count on supporting the middle class," said BH Securities Stepan Krecek.

“He doesn't risk a fine or a lawsuit for his statement, but he has a chance to win thousands of votes in this weekend's elections,” explained economist at Capitalinked.com Radim Dohnal on why Babis said that.

ANO's high potential to win the general elections has been also confirmed by the bookmakers at betting company Fortuna, as 90% of their bettors put their bets on ANO, with odds at 1.2:1, followed by SPOLU with odds of 4.8:1 and PirateSTAN with odds of 13:1.

Babis also holds a strong position among the bets for the next PM; a week before the election his odds are 1.85:1, followed by Petr Fiala with 3.75:1 and Bartos with 7.5:1.

"ANO is expected to win and anything else would be quite a surprise. [Election] polls and various [electoral] models show that assembling 101 [seats] will be no fun. The desired bride may well become SPD, and at the end of the day the parties that are teetering on the 5% mark at the moment may decide,” commented Michal Hanak, Fortuna's chief bookmaker.

“After the elections, the unity of pre-election coalitions may be a separate chapter, which will undoubtedly be an interesting variable in the event of a stalemate," he added.

COMMENT: New rightwing Czech government will have a short honeymoon unless it learns lessons from the past
EU challenges China’s Belt and Road with €300bn Global Gateway
VISEGRAD BLOG: Zeman tries to show he is still in charge of Czech foreign policy

Tens of thousands of people in more than 50 cities blocked roads against Serbia in protest against Rio Tinto's plans to build a huge lithium mine in the country.