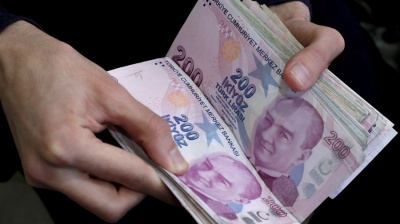 Not quite in wheelbarrow territory yet, but we're getting there.
By bne IntelIiNews October 27, 2020

The Turkish lira (TRY) for the first time sank past the 8-per-dollar threshold on October 26 as it continued on its worst losing streak since 1999. The all-time low by the end of the day was 8.0977.

Investors didn’t like last week’s switch back to economic unorthodoxy by the central bank, which declined to raise interest rates, they remain jittery at just how hard-wired into the hugely indebted economy Turkey’s economic imbalances now appear to be and they are disconcerted by Turkish President Recep Tayyip Erdogan picking geopolitical fights on an almost day to day basis. Goading EU leaders and daring the US to hit Ankara with sanctions appear to be the populist strongman’s current favoured pursuits. Another worry is that even though Turkey could soon be mired in its second balance of payments crisis within two years, Erdogan has vowed that the country will not go to the International Monetary Fund (IMF) for assistance.

The day saw the lira, into its tenth week of declines, weaken more than 1% from the pre-weekend close of 7.9650. It has lost 26% of its value this year and has more than halved in value since end-2017. Turkish authorities have spent about $134bn over the past 18 months to support the currency, according to a Goldman Sachs estimate.

“The rising geopolitical tensions with the USA and EU are new sources of pressure weakening the lira. The other main elements are the questioning of monetary policy credibility and the adequacy of the lira yield,” a local bank forex trader told Reuters.

The level of 8 lira to the dollar carries symbolic significance for the Turkish public, the business community and policymakers, analysts say. “It has a psychological effect,” Enver Erkan, an economist at Istanbul-based Tera Investments, was quoted as saying by the Financial Times.

Aykan Erdemir, Turkey Program senior director at the Foundation for Defense of Democracies (FDD), noted that when Erdogan assumed office on March 14, 2003, the exchange rate was 1.64 lira to the dollar.

The markets will now take a stronger interest in Turkish Finance Minister Berat Albayrak’s participation in Citibank talks with investors on October 27 and the central bank’s quarterly inflation report on October 28 will also be a big point of interest. Researchers have determined that Turkey’s official inflation reporting leaves much to be desired with inflation in reality thought to be rather higher than the national statistical institute says it is.

The lira on October 26 also hit a record low beyond 9.5 against the euro. Turkey's dollar-denominated government bonds fell by as much as 1.4 cents and the main Istanbul share index, the BIST-100, dropped 1.2%.

Instead of introducing a formal rate hike at its last monetary policy committee meeting, the central bank resorted to more backdoor tightening, raising the cost of funding by adjusting the terms of an emergency lending facility. But such “stealth tightening” is not cutting it with the markets, which want to see unambiguous action to defend the lira.

Erdogan at the weekend struck a defiant tone on the issue of possible sanctions from the US over Turkey’s testing of acquired Russian S-400 missiles, saying in a speech: “You don’t know who you are dancing with. Whatever the sanctions are don’t be late. Do it.”

Ukraine’s real wages up over 10% in October but have been stagnant in dollar terms for almost a year
BEYOND THE BOSPORUS: Turkish number crunchers deliver November inflation surprise of 14%
Iran calls on Saudis to limit $67bn defence spending to Tehran’s $10bn

Retail surpass pre-crisis peak as Romanians shop instead of holiday
1 day ago
Ukraine’s real wages up over 10% in October but have been stagnant in dollar terms for almost a year
1 day ago
Russian services PMI rises to 48.2, but remains underwater as recovery continues to slow
2 days ago
Poland’s PMI remains stuck just above the improvement line at 50.8 in November
3 days ago
Second virus wave ‘took wind out of Turkish manufacturing’s sails in November latest PMI shows’
3 days ago