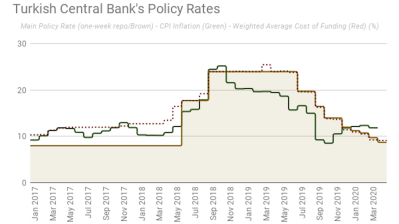 Turkey’s central bank on April 22 cut its benchmark interest rate by 100bp—twice as much as the market consensus anticipated—to 8.75% in a bid to keep credit flowing despite the coronavirus (COVID-19) upheaval and the risk of further undermining the embattled Turkish lira and financial stability.

After the move, the Turkish lira (TRY) lost 0.25% on the day, falling to 6.999 against the dollar, the weakest rate seen since Turkey’s 2018 financial crisis which produced an all-time nadir of 7.23. Reuters and Bloomberg poll medians predicted that the central bank would opt for a 50bp cut.

Turkey looks set for its second recession in two years given the heavy impact of the coronavirus pandemic on its key tourism, services and other industries and Phoenix Kalen, director of emerging market strategy at Societe Generale,  told Reuters that the rate cut—implemented despite the aggressive 1,425bp of monetary easing the central bank had already adopted since July last year—showed that the regulator’s “overriding objective is to support economic growth and it is willing to make sacrifices on the Turkish lira, as well as on financial stability and price stability considerations”.

Nafez Zouk, of the consultancy Oxford Economics, was quoted by the Financial Times as saying that Turkey was in danger of a “classic balance of payments crisis”, echoing warnings delivered by other analysts in recent months that by not learning the lessons of the mistakes that led up to its currency crisis of just under two years ago, the Erdogan administration was on course for a repeat. “The fall in export revenues from goods exports to Europe and from the fall in tourism are not going to offset the windfalls you get from [the crashed] oil prices [as a big energy importer],” he said.

Turkey’s gross reserves, including gold, sank from $105bn at the start of the year to $89bn in the second week of April. That equates to slightly more than half of Turkey’s short-term external debt, with $168.5bn of payments falling due in the next 12 months. It is anticipated that data to be released next week will show that net reserves—offering an indication of the central bank’s remaining firepower to defend the lira—were in negative territory in March once short-term borrowing through swap operations is taken into account.

After the rate cut move, government-owned banks sold at least $600mn to support the Turkish currency, two traders with knowledge of the matter told Bloomberg. The lira has weakened 15% versus the USD to date in 2020. Across 2018 and 2019 it lost 36%.

“The Turkish central bank has been fighting like crazy to keep the dollar-lira pair below 7, which often seems like a losing battle,” said Brad Bechtel, global head of foreign exchange at Jefferies in New York. “They continue to fight but the market continues to push against them and it feels only a matter of time before they are forced to capitulate.”

The lira is exposed to a global selloff—Turkey’s inflation-adjusted rates are now among the lowest in the world. Annual Turkish inflation in March stood at an official 11.86%. However, declines in commodity prices and domestic demand amid the pandemic are putting downward pressure on inflation, Turkish central bank governor Murat Uysal said on April 19. On the other hand, an even weaker lira could lift inflation and intensify the headache of the country’s corporate sector, which is heavily laden with FX debt.

With President Recep Tayyip Erdogan and his top officials continuing to push hard for a credit-fuelled economic rebound in Turkey, the country’s weighted-average cost of central bank funding was below the previous benchmark at around 9%.

“Yet another substantial rate cut is a clear indication that the priority is to support the economy that faces the prospect of a recession,” Piotr Matys, a strategist at Rabobank in London, said in a note. “But it also implies that the lira is even less attractive, which means that the central bank may have to spend even more on FX interventions.”

With Turkey’s number of officially recorded COVID-19 infections now the highest outside China, Europe and the US and ranking the seventh highest in the world—and some observers saying Ankara is not even presenting the reality of the situation, which they say is much worse—the central bank has also moved into quantitative easing (QE). Last month it expanded a bond-buying programme to stimulate the economy. Since the end of March, it has bought up nearly TRY27bn ($3.64bn) of government debt, most of it from Turkey’s unemployment insurance fund.

Jason Tuvey, senior emerging markets economist at Capital Economics, said in a note: “Policymakers pinned the decision to follow up last month’s emergency 100bp rate cut on mounting signs that the Turkish economy has entered a steep recession. While Turkey has the worst coronavirus outbreak among all emerging markets, the government has so far refrained from imposing the draconian lockdowns seen in other parts of the world to contain the spread of the virus. President Erdogan has insisted that his priority is to ‘keep the wheels turning’ in the economy.

“However, the latest timely indicators suggest that economic activity has still ground to a halt. Survey measures fell in March and the sharp slowdown in the movement of goods and people around the country in recent weeks suggest that figures for April will be much worse. Indeed, Turkey is among the most vulnerable EM to social distancing, partly reflecting its large tourism sector.”

He added: “While the economic damage is likely to mount, we think the central bank’s scope for further easing is increasingly limited by weakness in the lira. The currency had held up reasonably well during last month’s market sell-off but, as much as anything, this appeared to reflect official intervention in the currency market… The central bank’s firepower to support the lira pales in comparison with the size of Turkey’s external financing needs.”