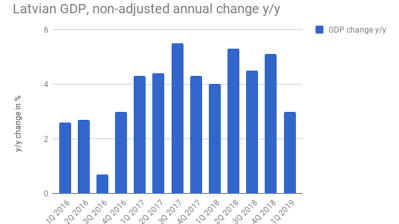 The Latvian economy grew an unadjusted 3% y/y in the first quarter, the Baltic state’s Central Statistical Bureau (CSB) said on May 31.

The CSB thus revised upwards the 2.8% y/y growth figure published in a flash estimate in late April. The reading also marks a slowdown versus unadjusted growth of 5.1% y/y seen in the fourth quarter and is in line with forecasts of deceleration in 2019, as investment growth is set to weaken.

Investment did drive the activity in the first quarter but its expansion slowed down to just 8% y/y, compared to a jump of 18.6% y/y in October-December. Household consumption expanded 3% on the year, 0.9pp below Q4 growth.

Overall domestic demand expanded 2.8% y/y. Exports of goods and services contributed with a 3.6% annual rise in the first quarter.

Sector-wise, growth was broad with most sectors registering growth except the “other industry” and real estate categories.

Elsewhere, there was a 7.4% y/y expansion in construction. Manufacturing grew 5% y/y in the first quarter.

In quarterly terms, GDP declined an adjusted 0.1% reversing from an adjusted expansion of 0.9% q/q the preceding quarter. The CSB did not publish seasonally adjusted data for annual growth in the first quarter.

The Latvian economy is forecast to grow 3.1% in 2019, according to the latest projection from the European Commission.

Estonia’s GDP falls 0.7% y/y in Q1 but coronavirus impact “not considerable” yet
COVID-19 lockdown results in collapse of Lithuanian retail sales in April
Estonia and Latvia among first countries to use coronavirus tracing app based on Apple/Google tech