KYIV BLOG: Zelenskiy is fashioning a cudgel of authority from the wisps of legitimacy 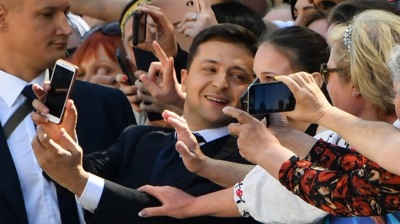 Ukrainian president Volodymyr Zelenskiy has little in the way of formal power, but his huge popularity is a formidable political force
By Ben Aris in Kyiv May 22, 2019

After only minutes on the job and with no formal party structure behind him, nor any representation in either the parliament or state organs, Ukrainian President Volodymyr Zelenskiy's first act was to dismiss the  Verkhovna Rada.

But Zelenskiy's order to dissolve the parliament has no force until he issues a presidential decree that may lift the legal fog surrounding his decision.

“So I ask you insistently to pass the law lifting the parliamentary immunity, the law on illicit enrichment, the long-suffering electoral law, and adopt open party lists. And also, I ask you to dismiss the [Security Service of Ukraine] SBU head, general prosecutor, defence minister,” Zelenskiy told lawmakers at the end of his speech. “This is not all you can do, but it’s enough for the beginning. You will have two months for this. Do this and hang medals on yourselves, and win points before the snap parliamentary election, for I dismiss the eighth Ukrainian Verkhovna Rada. Glory to Ukraine!”

It is not clear if he has the legal authority to do so. The new president has taken hold of the wisps of authority his title gives him and appears to have made some deft political calculations. From these wisps of legitimacy he is fashioning a cudgel of authority that is already moving Ukraine’s politics towards early elections and a parliament with a strong Zelenskiy bloc.

The first problem is Zelenskiy's call to dismiss parliament is probably not legal. The ruling coalition collapsed on May 17 after the People's Front faction, headed by former prime minister Arseniy Yatsenyuk, quit. Parliamentary rules give the government 30 days to form a new coalition after which the president can dissolve the Rada if no coalition is formed.

The second problem is that the president cannot dissolve parliament six months before a general election, which is slated for the end of October.

Taking these together, Zelenskiy is supposed to wait until June 17 before he can dissolve parliament if no coalition is formed. But after May 27 he can’t dissolve parliament any more because of the six-month rule. By withdrawing from the coalition, Yatsenyuk, whose party would not clear the 5% threshold to re-enter the Rada in October, is attempting to buy himself some time to resuscitate his party.

Zelenskiy has countered that because the coalition has never published either its membership list or the coalition agreement, in fact no coalition was ever formed and there has been no coalition since 2017 so he can invoke his powers to dissolve the Rada.

This position was attacked on May 22 by the chairman of the parliament Andriy Parubiy, who said that even if there is no coalition, it is not in the president’s competence to rule if the coalition exists or not. The constitution doesn't say who has the authority to make this call, which means by default it will be a question for the Supreme Court. But again, if the Supreme Court is asked to rule again the May 27 deadline will almost certainly be missed.

Forming a new coalition in the next five days is also a non-starter.

To add to the uncertainties Zelenskiy is also ignoring protocol, as to formally dismiss parliament he must sign a presidential decree, which may appear in the next days before the weekend. Once the decree is signed an election must be held within the next 60 days.

The scene is set for a constitutional crisis, however, Zelenskiy is well set to force the issue. In his favour is not only the tsunami of popular support that swept him to victory with a tally of 73% of the votes, but that can be set against the deep unpopularity of the government: a poll shortly before the elections found the government’s approval rating was only 9% — the lowest in the world. Even the ousted ex-president Viktor Yanukovych’s approval rating never sank below 27%.

If Zelenskiy were to force the issue and organise elections irrespective of legal objections he could bank on popular support to carry them off. Any Rada deputy that attempted to block them would risk bringing down public scorn, and even if the elections were delayed any deputy that made such an attempt would be presumably crushed at the subsequent polls.

The situation is now reminiscent of Russian president Boris Yeltsin’s stand off with the Russian Duma in 1993, when parliamentary deputies challenged the president’s authority. The subsequent constitutional crisis was only resolved by General Alexander Lebedev, who drove his tank squadron into the heart of Moscow and pounded the Russian White House with shells, beating the deputies into submission after three days of street fighting.

Yeltsin’s call on the army is now regarded as unconstitutional and his actions tantamount to a constitutional coup, but history favours the victor and one of Yeltsin’s first acts following the events of October 1993 was to change the constitution to increase his powers, retro-actively legitimising his decisions.

And Zelenskiy is lot more popular than Yeltsin. An poll published on May 16 gave his party, which does not have any structures or staff, support of almost 40% — a four-fold lead over his nearest rival. The pro-Russian Opposition Platform – For Life, as well as Petro Poroshenko’s Bloc and Yulia Tymoshenko’s Batkivshchyna, can each expect to garner around 10% support at best, according to polls.

The next round in the showdown will begin if Zelenskiy signs a decree to formally dissolve the parliament.

“A formal decree is still required for President Zelenskiy’s decision to dissolve the Verkhovna Rada to take effect, and this can be expected within 1–2 days,” the Centre for Eastern Studies (OSW) said in a note on May 22. Zelenskiy’s phenomenal popular support makes it extremely difficult for the incumbent political elite to resist the new president if he issues a decree.

“The first comments made suggest that President Zelenskiy’s decision will be acceptable to the main players. There are many indications that an unofficial consensus has now been reached concerning early elections with representatives of some parties (probably to take place in the latter half of July),” OSW said. “It appears that Petro Poroshenko’s faction is also in favour of proceeding in this direction, in order to capitalise on the mobilisation of Poroshenko’s electorate that took place during the presidential campaign.”

For a political neophyte, Zelenskiy has played a bold hand, so far with success. The deadline he set for the deputies during his inaugural speech to pass a list of laws in the next two months – exactly the time left before the earliest possible date for new elections – can also be seen as a trap.

The items on the list — lifting parliamentary immunity, re-imposing a law on illicit enrichment, election reforms and the dismissal of widely vilified officials – are all real crowd pleasers but would seriously undermine the elites' hold on power by opening them up to prosecution on corruption charges. The Rada deputies are very unlikely to pass any of these laws, but if they don't they only hand more ammunition to the Zelenskiy camp to use in the parliamentary elections and stoke his already sky-high popularity.

All in all not a bad first week on the job for Ukraine’s joker-in-chief.