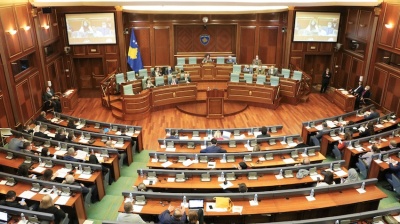 The Kosovan president is elected by the parliament.
By Valentina Dimitrievska in Skopje December 9, 2020

A failure to elect the new president of Kosovo in the first quarter of 2021 might cause the troubled ruling coalition to collapse and trigger an early election.

Kosovo's Prime Minister Avdullah Hoti announced earlier this month that he will meet the leaders of political parties soon in a bid to find a candidate for president following the resignation of Hashim Thaci, but so far there is no readiness for such a meeting on the part of opposition political parties.

Thaci resigned on November 5 after the Kosovo Specialist Chambers confirmed the indictment against him, charging Thaci with war crimes committed during his time as a senior member of the Kosovo Liberation Army (KLA) during the 1998-99 independence war with Serbia. Since his resignation, parliament speaker Vjosa Osmani has served as acting president

Leader of the ruling Democratic League of Kosovo (LDK) Isa Mustafa was cited by Telegrafi that he is in contact with political parties in the parliament, but that Vetevendosje is not ready to take part in a round table.

He said that the insistence of certain parties that only their leaders become president and not other candidates might trigger an early election.

“There are public statements of MPs insisting that they will vote only for their candidate for presidents. This proves that there is an ongoing battle through media and there is no willingness to organise a roundtable. Time is running out and we are heading towards another election,” Mustafa was cited as saying.

Leader of the Alliance for the Future of Kosovo (AAK), a junior party in the LDK-led coalition, Ramush Haradinaj, has been nominated by his party as its presidential candidate.

Haradinaj confirmed earlier this month that he will run for president as he is sure that the Hague-based Specialist Chambers did not file an indictment against him.

Haradinaj was questioned by the war crimes court in July last year, then resigned as PM, which triggered a snap election in October 2019.

The ruling coalition needs the votes of one of the two opposition parties in parliament, Vetevendosje or the Democratic Party of Kosovo (PDK), to elect the president.

The acting president of the PDK, Enver Hoxhaj, said the party will not become part of a process that would lead to the election of a president who contributes to internal divisions and isolation of Kosovo, a reference to Haradinaj.

Vetevendosje leader Albin Kurti said in a Facebook post that Kosovo needs to legitimise its institutions through early elections.

In Kosovo, the president is elected with two-thirds of the votes in the parliament.