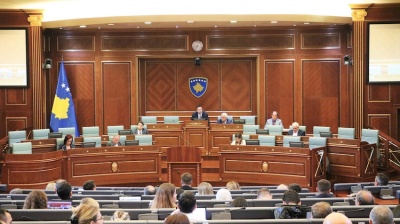 The parliament session on June 6, when KLA veterans tried to force their way into the building. / kuvendikosoves.org
By bne IntelliNews June 6, 2022

Kosovo Liberation Army (KLA) veterans tried to force their way into the parliament on June 6, saying they were overlooked when the government increased the minimum wage.

Kosovan police said they dispersed a protest by KLA veterans in front of the parliament, where they were protesting against discrimination against them regarding the minimum wage.

The police statement said that while the protest was taking place, some of the protesters tried to force their way through, damaged the doors of the parliament in an attempt to enter and threw various items as well as smoke bombs.

Two police officers were injured during the protest, which started at 10.00 am, after some protestors started to throw various items at the police. One citizen also sought medical help after inhaling smoke, the police said.

"The Kosovo Police has taken care of the protest, maintaining public order and providing security for protesters and official facilities," the police said in the statement.

The KLA fought against Serbian forces in 1998-99 for the independence of Kosovo, which was part of Serbia before 2008.

Kosovo’s government decided in April to increase the net minimum wage to €250, under a law which still has to be adopted by the parliament. However, KLA veterans are dissatisfied with the law, according to which their category will not see a raise of the minimum wage.

In addition to the protest, a MP from the opposition Democratic Party of Kosovo (PDK) Rashit Qalaj held a news conference, saying that for the PDK the law on the minimum wage is unacceptable.

"I think it is unacceptable for the PDK and we will not vote for this law,” he was cited by broadcaster RTK, adding that the party wants the KLA veterans to be treated properly with the draft law.