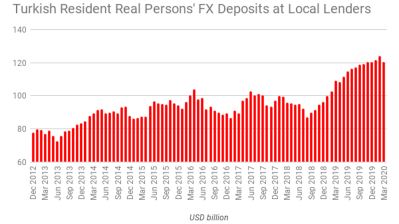 As the Turkish lira staggers from one bad day to the next on a very slippery footing, the lure of the dollar, gold and other attractive assets to business people who’ve obtained cheap ‘coronavirus’ local currency loans has Erdogan administration officials on edge—Turkish banking watchdog BDDK has sent a letter to some unnamed banks asking them to prevent borrowers from using debt to invest in foreign currencies, gold and equities, people with knowledge of the matter told Bloomberg on April 7.

But that would be literally mission impossible. Even if Turkish banks could prevent borrowers making such investments in the first instance, it would not then be possible to control what they would do with their money in the next or an even later instance, given Turkey’s foreign exchange and market regimes.

“Even if policymakers can prevent all lira leaks to offshore markets, one should bear in mind that may not prevent locals’ foreign currency demand,” Evren Kirikoglu, an independent market strategist in Istanbul, told the news agency. 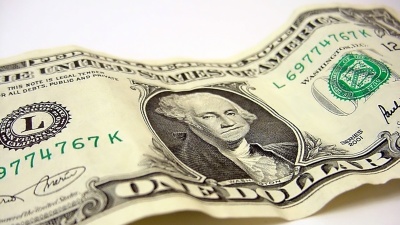 Bloomberg also reported that the new regulatory guidance might put an end to arbitrage opportunities that arose recently after offshore lira interest rates in London jumped to 69% last week, compared to the single-digit rates Turkish banks offer some loans at.

The government’s interventions in the money markets are crude and unplanned, and, right across the last decade, have provided clear arbitrage opportunities for local lenders, while regular people see no other option but to buy FX or gold to defend their savings.

Rising FX deposits do not create real FX demand as at the end of the day they are mere bank records. They act to absorb FX demand from locals, but non-resident real persons withdrew a total of $3.5bn from the local banking system in March, emerging as a new source of real FX demand.

With the coronavirus (COVID-19) pandemic hugely exacerbating core difficulties that in the past two years have run cracks through Turkey’s financial markets and, more recently, public finances, the government seems determined to print as much as money as it sees necessary to keep the already troubled Turkish banking industry afloat. Foreign currency risks, which over the years have been managed by officials intervening in the industry, remain a clear and present danger.

Of course, no one really believes in the official inflation data and the listed level of the USD/TRY rate.

Also on April 7, financial antagonism, caused by the starkly insufficient economic rescue packages advanced by the ‘empty coffered’ Erdogan regime in the face of the coronavirus outbreak, was cranked up.

Rifat Hisarciklioglu—the two-decade long head of the Union of Chambers and Commodity Exchanges of Turkey (TOBB), which represents legions of Turkish small and medium sized companies, and a prominent devotee of President Recep Tayyip Erdogan—said in an April 7 written statement that local lenders were rejecting loan applications from TOBB members by stating that the “[credit] limits have been reached”.

“I want to say the following to all the banks—now is not the time to think about profits and to decide which companies get loans and which don’t. We are in this boat together.”

The government-run trio of Ziraat, Halkbank and Vakifbank, responded with a statement that said Hisarciklioglu’s criticism was “unjust and unreal”.

Funnily enough, “unjust” and “unreal” are two of the most operative words in Turkey.