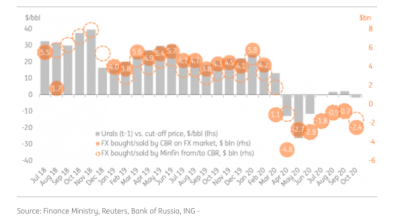 The recent weakness in the ruble has less to do with geopolitical tensions than a weaker than expected current account
By Dmitry Dolgin chief economist Russia at ING in Moscow October 9, 2020

In October, total FX sales will reach a four-month high of $2.4bn, some $0.4bn more than expected because of the undercollection in fuel revenues in September. This means that the role of foreign politics for RUB's recent weakness may have been overestimated, in, which case higher expected FX sales in 4Q20 could offer more protection to the ruble by year-end.

The Russian Finance Ministry announced that it will materially increase the volume of FX sold to the Central Bank of Russia (off-market transactions) from RUB54bn ($0.7bn) in September to RUB127bn ($1.6bn) in October.

The increase in FX sales was not unexpected given the $4/bbl decline of the Urals price in September, but the scale of the increase exceeded our and the market's expectations of RUB86-90bn.

MinFin explained the material increase in FX sales by the need to make up for the RUB50bn underperformance of September fuel revenues compared to the initial estimate.

The total amount of FX sold on the market in October will reach a four-month high of around $2.4bn, as in 4Q20 the CBR will be combining MinFin's monthly sale guidance with the residual FX sales left from the SBER handover deal.

The RUB50bn undercollection of fuel revenues in September potentially offers an alternative interpretation to the ruble's weakness in September, when $/RUB lost 4.6% vs. a 2.0% drop among peers.

While this underperformance has been commonly attributed to the heightened foreign policy risks (including risks of new sanctions related to chemical warfare), it now seems that a weaker-than-expected current account amid lower intervention may have played a bigger role in this.

On the negative side, it means that our expectations of a $3bn current account surplus for 3Q20 could prove optimistic. On the positive side, however, the increased market FX sales are more efficient in countering a weak current account as opposed to capital outflow, supporting our constructive view on the ruble for 4Q20.

All else being equal, the increase in FX sales from c. $1bn per month in 3Q20 to around $2-2.5bn in 4Q20 should boost RUB's resilience to external negativity. However, the electoral cycle in the US and expected SBER dividends in October (up to $2.0-2.5bn could be attributable to non-residents, in our estimate) makes any material appreciation from the current level challenging in the near term. A return to the $/RUB70-75 range by year-end, as we expected earlier, requires continued $ weakness globally, a moderation of the foreign policy risk perception on the Russian market (which seems to have been taking place for most of September) and signs of improvement in the local corporate capital account, which so far has been disappointing.

The next important data point that could shed light on fundamental drivers of the ruble is the 3Q20 balance of payments to be released on 9 October. 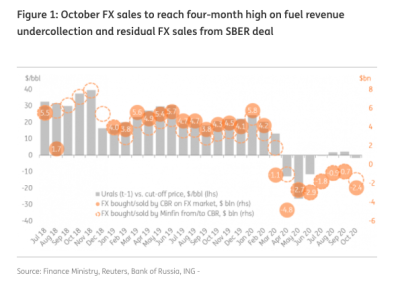 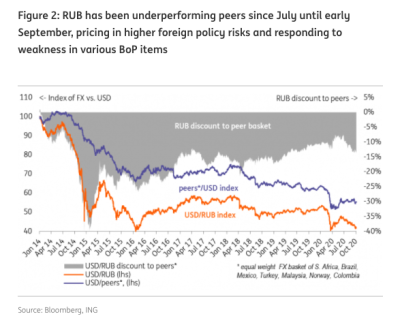