ING: Polish government’s electricity price cap to have only minimal impact on inflation 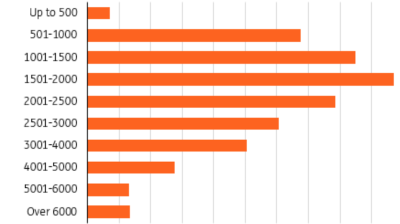 A plan by the Polish government to set a maximum electricity price for households, sensitive consumers, local governments and SMEs – coming on top of the freeze on prices for households up to a certain level of consumption - may cushion the impact of higher electricity prices on 2023 CPI to just 0.2pp - 0.4pp, ING said in an analysis on October 13.

The maximum price of PLN693 (€144.2) per megawatt-hour (MWh) pertains to the cost of energy only, i.e. excluding fees and taxes. The price cap pertains to annual consumption above 2,000 kWh per household, 2,600 kWh for households with a disabled person and 3,000 kWh for farmers and large families (at least three children).

Below these thresholds, prices are frozen at the 2022 level. At the same time, the government proposed a cap of PLN785/MWh for sensitive consumers, local governments and SMEs, covering up to 90% of their electricity use in 2022.

In 2022, electricity prices (without fees and taxes) for households from the four main regulated distributors (Tauron, Enea, Energa, PGE) range from PLN413.1 to 414.7/MWh. Provided that prices for consumption above the limit of 2000/2600/3000 per kWh are raised to the proposed threshold, the increase will be nearly 70%.

The cost of energy alone, on average, accounts for some 60% of the average electricity bill. The remaining 40% are distribution fees, taxes and other charges.

Potential price increases for households are of key importance in terms of the direct impact on CPI. Increases in energy prices for companies and local governments will affect consumer prices indirectly via the gradual pass-through of higher energy costs into prices of final goods and services.

Our survey in the SME sector indicates that price increases have so far been the most frequent business response to expensive energy.

Based on 2018 data, about 70% of households consumed less than 2,500 kWh annually. For the sake of simplicity, we have taken this level as the cut-off point for estimating average price increases for households consuming specific amounts of electricity. This threshold should compensate for households with higher limits (farmers, disabled, large families).
We do not yet know how the statistical office GUS will approach the proposed solution and translate it into CPI data, but we have decided to plunge in and come up with some preliminary estimates.

Assuming no change in distribution fees and taxes, we estimate an annual increase in the 2023 average household electricity bill of about 8-15%. The range depends on assumptions for the electricity amount consumed above the thresholds.

If the increase is limited to energy prices alone, more expensive electricity bills would bump up the CPI in 2023 by about 0.2pp - 0.4pp.

However, this is a rough estimate. It attempts to gauge the direct impact of prices for households on CPI inflation but does not take into account second-round effects from companies and local governments passing on higher costs to buyers, or a possible increase in the weight of energy in the 2023 CPI basket. We should be able to come up with a more precise estimate when the draft bill is made public.

The CPI inflation path for 2023 is uncertain given the uncertainty regarding energy prices. We still await a policy response to high gas prices as authorities may attempt to trim the 2023 price increase for households and sensitive buyers as well.

Meanwhile, petrol prices have risen again amid a strengthening dollar and higher oil prices following OPEC+'s sizeable cut in output targets. In an environment of still significantly rising overall energy costs, the headline CPI inflation may hit 20% late this year or early 2022, up from the latest reading of 17.2% year-on-year in September.

PANNIER: Might Tokayev be the real deal?
2 hours ago
OPINION: Bosnia economic salvage supplants breakup mood
5 days ago
ASH: Turkey is heading to “incumbent democracy”
5 days ago
RIMMER: You only sing when you’re winning
6 days ago
Hungary faces risk of severe economic instability if it does not get frozen EU funds, warns Oxford Economics
9 days ago