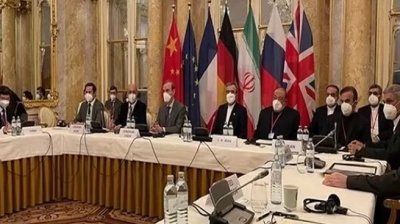 The talks in Vienna have run into trouble. / Fars News Agency.
By bne IntelIiNews December 3, 2021

The prospect of the renewed Vienna talks on restoring the 2015 nuclear deal collapsing next week seemed very real by the end of December 3 as Europe claimed that Iran had undone all previous diplomatic progress while accelerating its nuclear development programme.

Diplomats representing the E3, namely the three European powers at the talks—nuclear deal signatories Britain, France and Germany—expressed their disappointment at the negotiations reaching an impasse in a statement reading: “Tehran is walking back almost all of the difficult compromises crafted after many months of hard work [in the first phase of the talks]. Over five months ago, Iran interrupted negotiations. Since then, Iran has fast-forwarded its nuclear programme. This week, it has backtracked on the diplomatic progress made.”

If the talks founder and Iran continues developing its nuclear programme beyond the bounds of the nuclear deal—also known as the JCPOA—it risks an attack by Israel, which is concerned at how near the Iranians are to enriching uranium to a level of 90%, the level needed to provide fissile material in the production of a nuclear bomb. At the same time, Israel has acknowledged that even with such material it would take the Iranians around five years to assemble a nuclear weapon. Tehran, for its part, denies ever having had an ambition to build a nuclear bomb and accuses the Israelis of trying to poison the atmosphere of the Vienna talks with lies about its activities.

‘Unclear how gaps could be closed’

The EU’s chief negotiator, Enrique Mora, said the talks were suspended but would reconvene next week, while warning that two drafts presented by Iran—on sanctions the US would be required to lift and on what Tehran would be required to do to bring it back into full compliance with the JCPOA—posed a big problem. It was, said Mora, “unclear how these new gaps [in the negotiating positions] can be closed in a realistic timeframe on the basis of Iranian drafts”.

US Secretary of State Antony Blinken said: "What we've seen in the last couple of days is that Iran right now does not seem to be serious about doing what's necessary to return to compliance, which is why we ended this round of talks in Vienna.

"We're going to be consulting very closely and carefully with all of our partners in the process itself... and we will see if Iran has any interest in engaging seriously."

Iran’s top negotiator at the talks, Ali Bagheri Kani, was quoted by Iranian state broadcaster IRIB as rejecting the European response to the Iranian drafts, saying before he left Austria for Iran: "There is no problem if the Europeans also provide drafts, and they can be discussed, but they must be based on principles approved by both sides."

In an interview with Aljazeera, Bagheri Kani said Iran’s drafted proposals “cannot be rejected” as they were “based on the provisions of the 2015 agreement”. A third draft “mainly on the verification process [on compliance with the JCPOA] and the guarantees Iran is requesting from the world powers in order to revive the nuclear deal” would be presented, he added.

Prior to the reconvening of the talks, the delegations in the Austrian capital will return home to consult with their governments to seek instructions on whether the gaps can be closed. As well as the Iranians, British, French and Germans, the two other remaining JCPOA signatories, Russia and China, are attending the talks. The US has a delegation present that is being kept in touch with developments in the talks by European intermediaries, an indirect approach made necessary because the Iranians refuse to deal with the Americans face to face.

Iran has increasingly breached the JCPOA since, in May 2018, then US president Donald Trump unilaterally pulled Washington out of the agreement, even though Iran at the time was in full compliance with it in the assessment of UN nuclear inspectors. Arguing the deal should be tighter, Trump hit Iran with swingeing economic sanctions in an attempt at forcing Tehran to accept tougher curbs on its nuclear activities, as well as restrictions on its ballistic missile programme and a withdrawal of Iranian support for various militant groups in various Middle East conflict zones.

The hardline government that came into office in August in Iran is clearly unhappy at the thin acknowledgement from the E3 and the US when it comes to the fact that it was the Americans who wrecked the application of the JCPOA in the first place by abandoning it even though it was functioning as required.

The Trump sanctions have caused Iran immense economic damage and there are hardliners who say it will never be possible to trust the West, thus Iran should continue on a path of self-reliance and resilience, with a focus on economic potential that can be realised via trade and investment with Russia, China, other parts of Eurasia and beyond. At the same time, there are no guarantees that such a long and arduous path would prove fruitful enough and, with growing discontent in Iranian society over a lack of economic opportunities, other voices argue that Iran needs to come back into compliance with the JCPOA to quickly unlock wider trade and investment possibilities.

One concern of EU diplomats at the talks is that Iran’s proposals require the US to lift some sanctions imposed by President Joe Biden that are unrelated to the nuclear deal. The US is likely to baulk at that.

Mohammed Morandi, a member of the Iranian negotiating team in Vienna who serves as the team’s spokesperson, accused Biden of criticising Trump’s policy of maximum pressure against Iran but then sticking with the same policy.