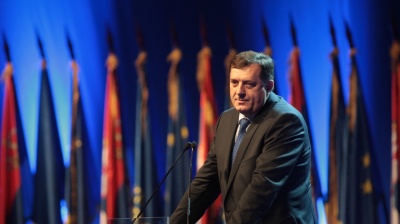 Dodik told the parliament in Republika Srpska that he often listens in to telephone conversations between representatives of the opposition parties.
By bne IntelliNews May 22, 2020

Opposition parties and Transparency International in Bosnia and Herzegovina (TIBiH) have filed criminal charges against the Serb member of the tripartite Bosnian state presidency member Milorad Dodik, whom they accuse of illegal wiretapping based on his own statements.

The charges were filed after Dodik told the parliament in the mainly Serb entity of Bosnia, Republika Srpska, on May 20 that he often listened in to telephone conversations between representatives of the opposition parties, saying it was normal practice.

“Dodik stated that he was eavesdropping on the representatives of the opposition by phone, that every government was eavesdropping on the opposition, and he recounted the content of telephone conversations of opposition members. He also stated that all this was delivered to him by Minister of Internal Affairs of Republika Srpska, Dragan Lukac, and then asked him to confirm his allegations,” TIBiH said in a statement.

Dodik said the claims were absurd.

“That is what those in the opposition would call a performance, or what ordinary people would call a joke,” Dodik said.

Bosnia to take out $75mn loan to develop the health system

The Bosnian Council of Ministers appointed a delegation for loan negotiations between Bosnia & Herzegovina and the International Bank for Reconstruction and Development at its session on July ... more

The total number of fixed telephone lines of the dominant telco operators in Bosnia and Herzegovina in 1Q was 557,537, marking a decrease of 3.1% y/y, according to the country's statistics agency. ... ... more

The European Investment Bank (EIB) has signed two loan agreements with UniCredit in Serbia and Bosnia & Herzegovina with a total value of up to €100mn to increase support for small and ... more